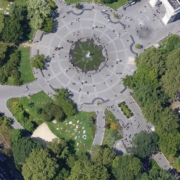 Several researchers from the Baltimore Ecosystem Study (BES) have a manuscript entitled “Theoretical Perspectives of the Baltimore Ecosystem Study: Conceptual Evolution in a Social-Ecological Research Project,” in press in the journal, BioScience.  The theoretical perspective this paper takes is a bit unusual for urban ecology.  That may seem like an odd assertion given the growing number of urban researchers, journals, and papers.  Yet, most urban research, whether shared in talks or in publications, introduces the presentation like this: “More than fifty percent of the Earth’s human population now lives in cities, and that proportion is growing at a rapid rate.  By 2050, as many as eighty percent of humans are likely to be urban dwellers, whether in towns, medium size cities, or giant megacities.”

These things are true, and they are compelling reasons for ecologists and others concerned with understanding and improving the environment of “home” and away to study the Earth’s urban ecosystems.  But there are other reasons to study and think about urban systems.  One of those reasons is to advance the theory of urban science.

Data gathering, thinking, discussion, and applying social-ecological knowledge to policy and management have had the hidden benefit of advancing urban theory.  Why does this matter?  Theory is the most comprehensive intellectual tool that scientists have for improving knowledge.  Theory does an amazing number of kinds of things for science and those that use it.[i]  Theory:

Other jobs of theory could be listed.  But the enumeration above gives some sense of why it would be useful to have an overarching theory for urban ecology.

Unfortunately, linking the term “ecology” to urban has caused some people to assume that the theory or even the facts contributing to urban ecological theory are only relevant to the green and blue places in cities.  Such a view seems to relegate ecology to parks, reserves, the few remaining unchannelized streams, or the wetlands that have escaped development in cities and suburbs.  Those who focus on the built, constructed, and technological features of cities — which are often the most conspicuous parts — may question the need for urban ecological theory.  They assume that something different than a theory informed by ecology is needed, because they seem to think that ecology doesn’t really apply to the whole city or urban area.

BES work has countered the assumptions that cities, suburbs, and exurbs — in other words urban systems in general — are not appropriately thought of as ecological.  We have approached metropolitan Baltimore as an integrated social-ecological system.  Some would add the word “technological” to that label[ii], and we agree that the human ecosystem of Baltimore includes social structures and dynamics, the constructed environment, along with the more familiar communities of organisms and the physical environment that are highlighted in the basic definition of the ecosystem.  “Social” includes institutions, information, power relationships, economics, culture, ethics, and politics, for example.  Constructed is a term consciously used broadly to indicate the reshaping of the land surface and stream networks, the installation of above ground and below ground infrastructure, wireless and broadcast media, along with buildings, roads, and impervious surfaces.[iii]

BES has developed empirical and theoretical depth and refinement, it has become clear that urban ecological theory addresses all these components, and it does so throughout the urban mosaic even when the biological component isn’t conspicuous enough to be labeled green or blue on a map.

Urban ecological theory, or if you prefer, simply urban theory as developed over 20 years in BES, addresses all the four kinds of components of the urban ecosystem mentioned above – biological, physical, social, and constructed.  The paper we have written discusses the initial anchoring theories of BES (environmental gradient theory and the watershed).  It goes on to describe how these two anchoring theories were tied together by three additional “bridging” theories: hierarchical patch dynamics, the variable source area theory of hydrology, and theory of socio-spatial heterogeneity.  These anchors and bridge spans were the theoretical content for roughly the first decade of BES.  During the second decade, additional disciplinary perspectives were integrated into the project, the original theories were refined, and new synthesizing concepts were added.  This allowed us to use three dimensions of complexity — space, organization, and temporal change — to organize and link areas as disparate as urban bid rent theory, riparian function, hybrid social-ecological land cover theory, and the role of biodiversity and species traits in the context of metacommunity theory.  Other contributions are discussed in the paper as well.  We’ll post again and tweet when the paper is available.

What emerges is a rich view of urban theory that is deeply ecological.  This is appropriate because ecology is the science of interactions in which organisms are involved.  Those organisms and their social and engineered structures[iv], and the processes they mediate, are parts of urban ecosystems.  But the presence, work and adaptation of organisms — including people as biological and cultural agents — are ecological phenomena in cities as surely as they are in a designated conservation area.

The big tools of ecological thinking — ecological theory in general and the ways it is used to guide research and application — are the ecosystem and the interactive network.  When put in the context of past and ongoing evolutionary adaptation, spatial heterogeneity across interacting scales, and a concern for processes rather than just static states, the full richness of ecological thinking emerges.  This way of thinking — this theory — translates well to urban places.  First, the theory identifies the general components and the broad kinds of interactions that occur in urban areas.  In a sense, both of these are just different flavors of the same thing — an interactive structure involving organisms and the things they affect and are affected by.  But urban systems require explicit attention to humans as not only as organisms, but as socially interactive individuals, as larger societies, and as various kinds of actors and aggregations within society.  Humans in their urban richness are as much ecological agents as are plants, microbes, and animals.  The constructed world is as much a part of urban ecosystems as is bedrock, sediments, climate, water, and air.  So it seems not only reasonable but also necessary to place ecology — the science of interaction — in the very center of urban science and theory.  Ecology is the nugget in the center of urban theory.  It can also be said to be a core part of the thinking of sustainable urban planning and design, of the use of nature based solutions to urban environmental problems, and of improvement of environmental justice in cities, towns, and suburbs.  Urban ecological theory is urban theory.

[i] The background thinking on theory relevant to contemporary ecology is summarized in Pickett STA, Kolasa J, Jones CG. 2007. Ecological Understanding: The Nature of Theory and the Theory of Nature, 2nd edition. Academic Press

[iii] The richness of the human ecosystem is presented by Burch WR Jr, Machlis GE, Force JE. 2017. The Structure and Dynamics of Human Ecosystems: Toward a Model for Understanding and Action. Yale University Press, New Haven.