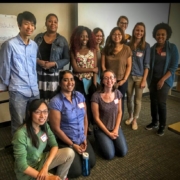 The 2018 twentieth annual meeting of BES participants, institutional partners, and interested citizens, provided an opportunity to ask people what they thought the most important finding or contribution of BES had been over those 20 years.  We were expecting suggestions that suggested specific results, or particular educational contributions.  We were surprised by the results.
First, we should note that the survey was informal and far from sociologically rigorous.  Although we handed out response cards to the more than 110 people registered at the meeting, we only received 15 returns.  Maybe not a bad rate given the usual percentage that even formal surveys achieve.  But that number is a caveat here.
So what did we learn?  The majority said that the most important contribution was BES itself as an intellectual network and community of practice aimed at advancing urban ecological science and its application.  This suggests that people value the opportunities for collaboration, data sharing, mutual encouragement, and fellowship with scholars and activists concerned with the city as a socially relevant system.  Of course, these last suggestions are our guesses, and maybe we’ll generate a more formal survey for the 2019 annual meeting to identify the particular things that people value.
But in the meantime, we are pleased that our longstanding concern with a culture of openness, inclusiveness, and focus on the Baltimore region as an environment and as a home has paid off.  An integrative, inviting culture can be both a goal and an outcome.
Steward Pickett, Director Emeritus
Some relevant BES papers:
Pickett, S. T. A. 1999. The culture of synthesis: habits of mind in novel ecological integration. Oikos 87:479–487.
Pickett, S. T. A., W. R. Burch, and J. M. Grove. 1999. Interdisciplinary research: Maintaining the constructive impulse in a culture of criticism. Ecosystems 2:302–307.
https://baltimoreecosystemstudy.org/wp-content/uploads/2019/02/BES-2BGrad-2BStudent-2BSymposium-2B2016.jpg 821 866 John Lagrosa https://baltimoreecosystemstudy.org/wp-content/uploads/2019/04/BES-Circle-Text.jpg John Lagrosa2019-02-27 16:21:002019-04-11 12:27:06What Do People Value About BES?
Branches – Young Environmental Scientists

Where Does the Baltimore School of Urban Ecology Apply?
Scroll to top