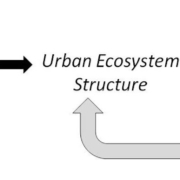 Long-term ecological research is faced with seemingly contradictory constraints: It must maintain a consistent stream of rigorously comparable data over time while at the same time responding to conceptual and theoretical changes in the disciplines underlying those data.  How can such opposing  constraints be reconciled?
BES has faced this challenge in developing its most recent proposal.  It was required to shift from a framework that — although it highlighted a frontier topic in the understanding of social-ecological systems — proved to be problematical for many readers.  In response, members of the project management team took a step back and sought ways to improve the conceptual framework.  First, they wanted to simplify the conceptual framework.  Second, they wanted to increase its parallelism with frameworks of other LTER sites.  Finally, they wanted to emphasize the interactions on multiple scales that caused the changes in urban social-ecological systems over time.
This stepping back took us to the foundations of BES.  The project was founded to examine the basic biophysical structures and functions in an urban system, and how they interacted with social processes, all in a context of change.

The Founding Ideas of BES

So the founding question of BES asked: How do biological and social patch dynamics combine to shape and change a metropolitan area?  This question was operationalized by applying the watershed concept in a city-suburban-exurban matrix, and by examining nested hierarchies of social, biological, soil, and hydrological processes as potential causes of urban change.
In revisiting the framework, we looked at what the first three phases of BES had accomplished, and what they suggested about refinements in the concepts.  Furthermore, we looked at the improved understanding of climate change and globalization that had developed over the nearly 20 year history of BES, to see what those insights suggested about revision of our framework.

New Pressures in the System

It was clear that effects of climate change through sea level rise, increases in storm intensity and frequency, risk of drought, increase in heat waves, and shifts in species ranges were likely to alter the structure and functioning of our urban ecosystem.  Furthermore, globalization was likely to alter human migrations, increase the pressure from introduced and/or invasive plants, animals, pests, and diseases, as well as work continuing social-demographic changes within our region.  These ideas had not played significant roles in the initial conceptualization of BES, which was concerned primarily with testing how well ecological approaches worked in an environment where they had not been tried previously.

An additional refinement emerging from BES and other urban social-ecological research also played a role in the evolving framework.  Early on, leaders of BES and its sibling LTER, the Central Arizona Phoenix project, had pointed out the difference in studying ecology in the city versus studying ecology of the city.  The latter approach required an integrative, interdisciplinary stance and investigated all habitats in an urban-suburban-exurban matrix, not just the conspicuously green patches.
Taking ecology ofthe city seriously generated a new land cover conceptualization and classification, and required examining the intimate feedbacks between social and biophysical processes over various temporal scales.  Indeed, the urban ecosystem is now seen as “coproduced” by natural and social processes, and consequently, to possess a hybrid social-ecological-technological structure (Rademacher et al. 2018).

Key Features of a New Framework

Exogenous drivers are those that originate or are controlled from outside of the local or regional urban mosaic.  Climate change is clearly exogenous, as are regional patterns of atmospheric deposition of gasses and particulate pollution.  Much of the economy of urban regions is driven by national and international investments, policy, allocation of jobs, and movement of resources and commodities.  Governance anchored beyond the city, such as requirements of regional compacts, state law and regulation, federal regulations, and private-public interactions, can affect a metropolis or its parts.  Technology emerging elsewhere may also alter the fluxes of matter and energy available to a city, and human population can be altered by regional, national, or international migration numbers and directions.
Some of the factors enumerated as “exogenous” may, if they are managed or shaped within the city or metropolis, act as local or endogenous factors.  It is the origin and distance which determines exogeneity, not the specific type of flux or influence.  For example, the movement of people within a metropolis could reflect local environmental perceptions, behaviors, and organizational networks.

The functional responses are divided into three linked process realms, long used to organize BES data collection. Watershed biogeochemistry addresses the amount and content of water flowing through constructed infrastructure and biophysical features of catchments.  Local ecosystem production and nutrient transformations are driven by the biota, represented by plant, animal, and microbial communities. These are indexed by key sentinel species.  Human environmental perceptions, behaviors, and the actions of organizations constitute the social functions of the urban ecosystem.  Clearly, all three functional realms interact with each other.  Equally clearly, the functional interactions feed back on the structural filter by which external drivers impact the system. 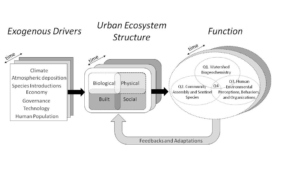 Similarity with Other LTER Site Frameworks

This new framework is intended to be readily interpretable by ecologists working outside of urban areas as well as those who focus on urban places.  In fact, the general schema for the framework is very similar to that of the Hubbard Brook Ecosystem Study LTER, located in the forests of the White Mountains of New Hampshire.  Hubbard Brook is one of the oldest LTER projects, and focuses on understanding the dynamics of forested watersheds under the influence of exogenous factors and local management choices and ecological succession.  Exogenous factors are well illustrated by the Hubbard Brook study, where acid rain from distant sources was first identified in North America.  Current examples of climate changes include the role of reduced snow cover, and intensification of winter storms.  Of the existing LTER sites, the vast majority include some sort of exogenous factors in their roster of drivers.  Climate change, sea level rise, and human generated land use change are commonly identified as exogenous drivers. 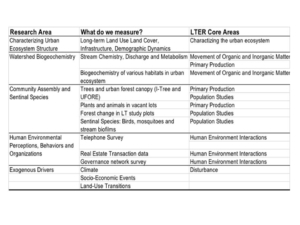 BES has revised its conceptual framework by identifying the fundamental ecosystem structures and processes represented by its ongoing, long-term data collection, while at the same time organizing the structures and processes differently than in its original conception.  In this way, we hope to have clarified the big ideas that motivate and tie together the data streams emerging from a still under-studied ecosystem type.  The framework combines some of the most fundamental ideas from ecosystem science with the novel structure and large changes represented by urban systems.
Steward Pickett and Emma Rosi

Why Do Urban Ecology?
Scroll to top