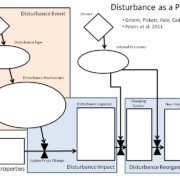 Ecological disturbance is often defined as an event that disrupts the structure of a specific system (Pickett & White, 1985).  This kind of material or physical disruption is important because it can result in changes in behavior of the system, or leave heterogeneous structural legacies that affect the system in the future (Pickett, Cadenasso, & Jones, 2000; Wiens, 2000).  Such a general and potentially significant ecological process requires conceptual clarity in order to use it successfully (Pickett, Kolasa, Armesto, & Collins, 1989).  As is often the case, seemingly simple definitions actually require great subtlety in their application.  Disturbance invites that kind of attention.
This essay shows that disturbance can be recognized in two ways.  The first is based on empirical experience with events that have, in the past, commonly acted to disrupt structure of various systems.  This approach can be called event-based detection of disturbance.  The second approach allows disturbance as structural alteration to emerge from the comparison of different kinds of trajectories in a system.  Using such a lens, disturbance shows up as the intersection of long-term data about phenomena or processes with long-term data on system structure or function.  This second approach can be labeled emergent detection of disturbance.  This distinction may be important when disturbance is studied in systems where there is little prior empirical experience, or where interaction of events may be particularly complex.

Although disturbance is one of ecology’s fundamental processes, the concept continues to be refined as more examples are brought to bear on understanding disturbance (Peters et al., 2011).  Disturbance can be conceived as a process, of which a conspicuous or powerful event is only a part.
The process as a whole actually involves interaction between the forces embodied in the event and the characteristics of an ecological system that is exposed to the event.  The system characteristics govern how the forces can affect the system of interest.  In this sense, disturbance can be seen as a complex process because of the multiple interactions between an event and a place.
The description above requires a caveat.  The term system can be used in different ways in reference to disturbance.  One arises because it may be reasonable to consider disturbance itself as a conceptual system of interacting components and phenomena.  “Disturbance as a system” refers to a conceptual model of the event, forces, and characteristics of places that may be affected by disturbance (Figure 1).  In contrast to a conceptual model involving disturbance, “the system of interest,” uses the word system to refer to a concrete location, habitat, place, or ecosystem.

The refined conceptualization of disturbance, assumed here as background, suggests that there is more than one way to recognize or detect a disturbance.  The first is familiar, and rather intuitive when applied to scales comfortable to humans.  If we can travel through a system, and observe its dynamics at multiple points in time, it is usually easy to identify what a disturbance is.  Walking through a forest after a major wind storm may reveal newly fallen canopy trees, with their upturned roots, and the soil pit from which the roots were wrenched.  In that forest, some trees may have been snapped by wind, and saplings and immature trees may have been broken or bent as canopy trees fell on them.  The scene may be a complex jumble of altered forest structure from the canopy to the subsoil.  This is clearly a disturbance to the formerly intact forest ecosystem, and the motive force of wind equally clear as a driver.  Similarly, walking into a forest some time after a fire, whether one that “crowned” and burned the canopy, or one that was restricted to the litter layer on the ground, shows structural disruption of the prior forest structure.  New seedlings, surviving saplings released from competition with canopy trees, and understory herbaceous plants may respond by faster growth or enhanced reproduction following disturbance.  Such a human-scaled, intuitive recognition of disturbance events has led to familiar, if imprecise, statements that floods, fires, ice storms, landslides, hurricanes, and tornadoes “are disturbances” a priori.
The general model of disturbance (Figure 1) captures these intuitive cases that are linked to human size and experience quite well.  The model suggests though, that understanding exactly how the force of wind, the weight of ice, or the chemistry of combustion affected particular parts of an area require that the nature of the potentially impacted system or area to be known.  This requirement may be realized by rigorous and long-term observation of a system.  But generally, the focus on events matches the requirements of the general model well.  This use of the model is an example of the event-based approach to detecting disturbance.

Emergence is a contrasting approach to discovering disturbance.  Not everything that causes disturbance may be the result of a familiar or human-scaled kinds of event, like a hurricane or a flood.  In such cases, the disruption of system structure may result from the application of unexpected or non-intuitive forces.  Non-intuitive forces may exist on scales difficult for individual people to comprehend intuitively.  In addition, such unfamiliar drivers of disturbance may be especially characteristic of social-ecological systems.  The difficulty here is that powerful social-ecological drivers may seem ordinary and unexceptional to people in daily life.  Processes of real estate investment, employment opportunities, or government regulation may not seem at first glance to be the stuff of disturbance.  This invisibility of social-economic drivers is in part a result of the hybrid nature of such systems.  Hybridity or social-ecological-technological system structure means that the forces may have material and social momentum.
What does such hybridity of forces mean in concrete terms?  If disturbance is an event that disrupts system structure, what counts as an effective event depends very much on what the model of the system is.  The requirement that an explicit model be used to determine what is and what is not a disturbance is an often neglected fundamental of disturbance studies.  Models of hybrid systems can express very different kinds of structures, all of which are important facets of the larger, more inclusive urban ecosystem.  The models state what components the system contains, and how the components of the system are networked together.  For example, social-ecological systems can have structures that serve to transfer information, or transmit social expectations.  Information may include the flows of capital or credit, and expectations may be transmitted in the form of such things as social norms or neighborhood cohesion.
What can alter the such a socially inflected structure?  Of course, the physical disruption of communication infrastructure can be a disturbance.  This is very much like classical disturbance in ecology.  Alternatively, the physical networks may persist while the capacity of the social network to transfer information may break down due to the removal of an institutional node in the flow of information.  Or restriction of loans in specific areas may disrupt the financial resources that permits people to maintain and refurbish housing stock; ultimately this disruption of the financial system may appear as a material disruption in the urban fabric as buildings are abandoned and perhaps demolished.
Examples of social features of structure can be labeled a “social contract,” or an “ecology of prestige,” each of which communicates expectations that influence how people interact in particular places.  A social contract in a African American neighborhood is a structure that can be disrupted by the novel, and perhaps conflicting, expectations about how public space is used and regulated that are put in place by gentrification.  The ecology of prestige is a place-specific social structure expressing a shared aesthetic that directly affects environmental form and management.
Disturbances of this kind are particularly complex, and may be more readily discovered by examining the trajectories of change in urban systems than by focusing on specific kinds of physical events (Figure 2).  Trajectories in important biophysical features of urban systems should of course be monitored, as should drivers from outside the system that can cause structural disruption.  However, the events that contribute to disturbance as a process can also arise within the system due to the interaction of changes in various system components.
The fact that disturbance can arise in two ways in social-ecological-technological systems is a part of the complexity of urban ecology that has helped refine the understanding of one of ecology’s basic phenomena.  The fact that the Long-Term Ecological Research program listed disturbance as one of the five core areas for research in its study sites is a symbol of the importance of disturbance across a range of system conceptions including populations, communities, landscapes, and ecosystems.  Disturbance can be hypothesized a priori in for some kinds of models, but must be detected analytically in others.
Steward Pickett