I had the pleasure of contributing to a field trip of visiting landscape architecture students and their professor recently.  Getting out in the neighborhoods and habitats in Baltimore is always fun and rewarding.  Plus the reaction to visitors often helps refine how we talk about and present our work and engagement with communities.

While showing off some of the theoretically interesting and practically important work on vacant lots led by Chris Swan in collaboration with his students, I was asked why Baltimore looked like it does.  I took a deep breath.  Most people expect a simple answer.  But the answer actually involves a complex system and its history.  My answer was helped by having just read a piece in the Atlantic City Lab, entitled “The Problem of Resegregation,” which highlighted the work of Prof. Gary Orfield at University of California Los Angeles (http://www.citylab.com/housing/2016/02/the-problem-of-resegregation-in-suburbia/462396/).
Here is how Orfield would answer that question (and in the field, I borrowed his framing).  Integration in American cities and suburbs is fragile.  Although slightly more than 40 % of people in suburbs in the United States live in integrated neighborhoods, it is easy to tip from integrated to segregated.  This phenomenon is happening in America’s “inner ring” suburbs currently.  The drivers of these changes reflect many of the same dynamics that have been playing out in Baltimore for decades.  Here is a summary of Orfield’s list, derived from scholarship based on many US urban areas:
1. Racial steering, in which whites and blacks are steered by the real estate industry to separate neighborhoods.  Block busting, a familiar process in Baltimore (as in many other urban areas) is an example of this.
2. Mortgage discrimination, in which it is more difficult for black households with a given level of income to receive financing than a white household of the same income.
3. Discrimination by individual buyers and sellers.  (This or a version of it couched as “white flight” is sometimes the only answer given to the question of why.)
4. Preferential location of public housing in minority or integrated neighborhoods.
5. Gerrymandering of students from poor families into less wealthy school districts, and subsequent rezoning.
That is a comprehensive list, and it goes a long way, when combined with the increasingly well documented history of such discriminatory actions in Baltimore, to explaining why a particular neighborhood in the city looked to a visitor the way it did.
Later I realized something about that question: Why does Baltimore look like it does?  The question that made me take a deep breath that bright sunny day in West Baltimore, could have been asked anywhere in the metropolitan area. 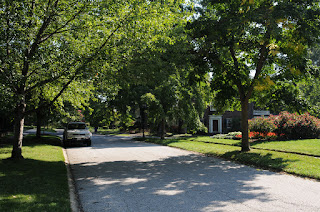 And the answer would be the same: a complex system of social, economic, and policy actions is what explains what each neighborhood in the Baltimore region looks like.  Not only do those half dozen causes apply when in a vacancy-plagued neighborhood in West Baltimore, but they also apply to the tree-lined avenues of sturdy stone homes, to post-war suburban cul de sacs, and to exurban areas dotted with mansions behind white rail fences.
Why Baltimore looks like it does is due, in very large degree, to a regionally distributed system of social sorting.  BES is discovering the ecological processes that reflect those differences in neighborhood physical and social structure.  We can’t ignore the complex systems answer that explains the sorting as we work do understand the ecological implications of spatial heterogeneity across the broader city-suburban-exurban-rural system.
https://baltimoreecosystemstudy.org/wp-content/uploads/2019/04/BES-Circle-Text.jpg 0 0 John Lagrosa https://baltimoreecosystemstudy.org/wp-content/uploads/2019/04/BES-Circle-Text.jpg John Lagrosa2016-02-29 11:56:002019-04-11 12:29:40“Why Does Baltimore Look Like It Does?”
Where did Urban Ecology Come From? Zev Naveh and the Total Human EcosystemThe Invisible in the City
Scroll to top