One answer to the question of where urban ecology came from has to point to Zev Naveh.  When I first heard Zev Naveh (1919-2011) a professor at Israel’s Technion, talking about the “total human ecosystem,” I didn’t get it.   Zev, whom I later hosted on a sabbatical visit to Rutgers University, was way beyond my thinking about people and ecology at the time.  I had been working on how communities of annual plants that colonized disturbed, post-agricultural lands were put together.  I was also developing and generalizing ideas about natural disturbance, and working to put succession in a connected, dynamic landscape perspective.  I was just beginning to seriously think about humans and nature as a big picture.  But at the time “landscape ecology” was just coming together.  Zev was one of the people who was developing that big new field at the time. 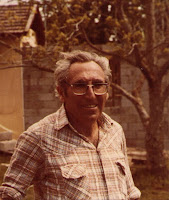 One of his main points was that people were parts of real ecological landscapes.  That much I got.  That idea resonated with Richard Forman’s seminal definition of landscape, exemplified by the book written with Michel Godron in 1986.  Richard and I were colleagues on the faculty of Rutgers University for about seven years.  In fact, Forman had invited Zev to Rutgers for that sabbatical year, but had been lured away by Harvard before Zev arrived.  So I became Zev’s host and colleague for that academic year.  Since that visit, I had often seen Zev at national and international ecological and landscape meetings.  But I must admit, that the idea of the total human ecosystem had become a little rusty in my memory.

A few days ago, I was assembling papers to prepare for writing a new paper.  As is often the case, digging around in the bibliography of one paper leads to new papers, or reminds one of things that one had neglected for a while.  I came across a citation of a published lecture of Zev’s that I hadn’t read.  It was in an obscure publication, but fortunately The Technion had archived some of Zev’s papers on an accessible website.  Here’s what I was reminded of.  And the embarrassing admission is how useful Zev’s thinking  — summarized in 1992 — about urban ecosystems remains.  Here are some nuggets, admittedly filtered through my current lens of urban ecological thinking.
·        There are deep literatures in the components he brings together, going back to plant ecologist and iconoclast Frank Egler (1970) for the total human environment idea first used in discussing industrial agricultural impacts.  His brief literature cited contains classics of hierarchy theory, systems theory, and complexity theory.  Jantsch (1975) is another key contributor to Zev’s thinking on complexity.
Well, it’s a little sobering to find so many ideas that many of us take as hallmarks of “modern” urban ecology so well articulated and well foreshadowed so long ago.  But on the other hand, it is comforting to know that one of the inventors of landscape ecology, and one of the champions of systems theory and understanding spatial heterogeneity in ecology was pointing to the path urban ecology has followed.