The fundamental definition of disturbance is a physical disruption of the structure of a specified system.  The term may also be applied to the specific event that causes that disruption (Pickett et al. 1989, Peters et al. 2011). 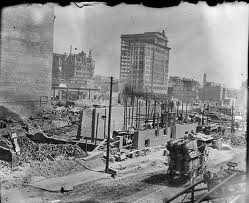 The basic definition of disturbance is neutral.  It is independent of scale, level of organization, or kind of ecological research approach.  Furthermore, it does not indicate what the subsequent effects of the physical disruption are, or whether any such effects are “good” or “bad” for the system as a whole or for different components of the system.
[Box 2 Disturbance Effects: The high rates of infant mortality experienced in late 19th century Baltimore as a result of water-borne cholera epidemics led those who could to abandon the low-lying areas of the city for higher ground and suburban locations.  Prior to that migration, poor and minority Baltimoreans had lived relatively near their places of factory or domestic work.  Especially for domestic workers, racial and class segregation were very fine scaled, often involving differentiation between street dwellings for employers and alley residences for domestics. The suburban migration of the 1880s was thus a cluster of events that started Baltimore down a road of segregation that was reinforced by policy and differential access to resources over the next 100 years (Hinman 2002).  Migration from cholera-infested low elevation areas was good for those who could afford it, while putting those who could not afford or who were not permitted to move at a significant disadvantage.  It would only be in 1911 when Baltimore installed sanitary sewers and prevent waterborne diseases.]
A model of the system of interest is required to understand what constitutes a disturbance and what its effects might be (Pickett et al. 2000).  An explicit model of the system would specify such things as the spatial extent, spatial grain, temporal extent, temporal grain, physical components, functional connections among components, and the kinds of dynamics involved in those connections.  In the general terms of systems models, a disturbance removes or damages a component, or removes a physical connection between components.
It is important to separate the causal event or physical disruption from the effect of the disruption.  An explicit system model helps to accomplish this separation (Peters et al. 2011).
[Box 3: Response to Disturbance.  Post-fire changes in Baltimore included such things as standardization of fire hose fittings, zoning changes, and altered construction regulations.  Physical environmental changes include the reshaping of Baltimore’s shorelines by the dumping of fire debris and subsequent building on those new surfaces.  Indirectly, the need to rebuild downtown led the state of Maryland to empower Baltimore City in ways that had been withheld previously.  These changes suggest a model of the system, and the isolation of cause and effect promote the analysis of social and political causes and social, political, and environmental consequences].

Ecological experience with disturbance suggests features of the concept that are likely to be equally important in its urban application.
Disturbance is often said to have a sharp onset, or to be a relatively discrete event.  This implies that events may have sharp, slow, or stepped onset, may have short or long duration, and may have rapid, slow or stepped decay over time.  As the understanding of disturbance has matured in ecology, gradations among events in terms of onset, duration, or decay have been recognized and exploited (Pickett and Cadenasso 2009).
No kind of event — like fire or flood — is always a disturbance.   This caution is especially important for complex human activities.  Certainly, considering humans per se, or urbanization, or agriculture as disturbances a priori, may lead to confusion.
Complex activities, like those mentioned above, must be disaggregated into separate events so that their effect on systems of various scales can be determined (Bart and Hartman 2000).  For example, farming may include such diverse activities as site preparation, fertilization, weeding, harvesting, grazing, and cover cropping.  The nature of these specific component activities may change depending on the crop or kind of livestock, the market opportunities, and the various sources of income and kinds of regulatory constraints and opportunities that exist.  Furthermore, the specific activities can change over long time periods as access to markets, technology, and fashion change.
Even natural occurrences, such as hurricane, are complex combinations of specific events.  Hurricanes, for example, may act as disturbing events through the direct effects of wind, the direct and indirect effects of soil saturation by associated rainfall, riverine flooding, coastal storm surge flooding.  Not all hurricanes, even those acting in the same geography, will possess or combine all those events in the same way.
The specific order of events may be important to the realization or effect of disturbance.  For example, hurricane winds that act before soils are saturated by wind may generate different kinds and severity of physical changes in forest canopy than those which arrive after long periods of rainfall.
The nature of the receiving system can determine the magnitude and location of disturbance.  For  example, the effect of a hurricane may depend upon its speed of travel over a region, the amount and timing of rainfall, wind speed, relationship to the tidal cycle, relationship to prior saturation of the soil, successional stage of vegetation, and slope and aspect of sites in the path of the storm.  The built components of systems exposed to potentially disturbing events may suffer different amounts of damage depending upon structural soundness, orientation, whether the buildings have been secured, and other management and design decisions in place.

The term disturbance was introduced in the mid 1980s to encapsulate the growing appreciation of the ecological community that physical disruptions of communities and ecosystems were not uncommon.  Indeed, the structure and function of many ecological systems owed a great deal to the spatial and temporal patterns of periodic events.  This was counter to the emphasis of ecology on systems perceived as climax, stable, or unaffected by humans.  The term was intentionally provocative, but as its technical use settled in, the need to abandon the vernacular baggage was emphasized in ecology.
Disturbance Regime.  Although the occurrence of any single event might have stochastic behavior (like weather), the existence of a temporal and spatial distribution of such events was statistically predictable over some time and space frame (like climate).  The temporal and spatial pattern of disruptive events is labeled a disturbance regime.  Disturbance regimes, or lack thereof, are an important part of the environmental drivers in various systems.  Examples include the long-term space/time patterns of crown-destroying wildfires in many coniferous systems, the role of drought in mesic regions, or riparian-structuring floods.  Species adapt to different aspects of the disturbance regime and aftermath, and the composition and function of ecosystems adjusts to the patterns and effects of disturbance regimes over the long term (Pickett 1998).
Perturbation.  While this term also refers to a disruption of system structure, it connotes an equilibrium or linear system dynamic which is altered by some event.  Often return to that equilibrium or previous trajectory is of interest.
Stress.  This concept has be used in ecology to refer to processes that directly alter the performance or behavior of a system rather than its structure.  Disturbance affects three dimensional structure, that is anatomy or architecture, of a system.  Stress on the other hand affects physiology or activity of the system of interest.  Stress may ultimately lead to a physical disruption of system structure.   The relationship between stress and disturbance is one reason that this essay has not discriminated between endogenous and exogenous sources of disturbance.
Press and Pulse.  These terms contrast events that have sharp attack and short duration — Pulses — with events that establish persistent new conditions.  While the term “pulse” may be essentially the same as disturbance, press can have either the direct physical effects like disturbances or the more physiological effects of stresses.  Note that the term pulse does not necessarily imply a regular rhythm of events.
Intervention.  In ecology, this neutral term does not have the same connotations as either perturbation of stress.  However, it is not neutral in other disciplines, where it may stand for certain theoretical approaches, or critical stances.  In ecology, it may be a useful substitute for disturbance in situations where 1) focus is on the action taken by humans to achieve some social or institutional goal; 2) either anatomical/architectural or physiological/functional origin of the change would be of interest; and 3) complex or indirect effects are envisioned that combine stress and disturbance or have not yet been successfully disaggregated into the immediately causal events.  Intervention as a term may be a useful place holder, or a term that invites smoother interaction with certain other disciplines such as social scientists and urban designers.
Z.  In a model of system i, consisting of specified components, during time period t,and over extent l, let z equal…

The basics of disturbance must be kept in mind in exploring how that concept applies in urban ecosystems.  My initial explorations of disturbance took place in systems such as primary forest in Pennsylvania, old-field succession in New Jersey, riparian zones in South Africa, and the Negev Desert.  But I am certain that the clarity that has emerged in my mind from struggling with the need to both generalize across these and other situations, and to understand the specific mechanisms and constraints that operate in specific sites will be helpful in urban areas.
Too often, disturbance has been misapplied in urban contexts.  Treating urbanization itself as a disturbance does not necessarily promote an open minded understanding of this complex process and its equally complex and mutable product.  Nor does considering people to be primarily a disturbance agent, external to some pristine ecosystem within urban boundaries or as a disturbance with regional extent, lead to an understanding of people as parts of ecosystems that combine natural, built, and managed places and processes.
There is much still to learn about disturbance in the urban context.  Some general questions, which will have local and thus more specific versions, are these:  What disruptions of the physical structure of urban areas have biophysical effects?  How do they lead back through social processes to affect vulnerability or resistance to subsequent disturbances?  How are disturbance and stress in cities related?  What social, political, and economic interventions disturb urban systems, either in whole or in part?  What peoples and institutions are sensitive to those disruptions?  What features of urban systems contribute to ecological resilience in the face of disturbance and stress?  Note that this last question refers to ecological or evolutionary resilience, as defined by (Holling and Gunderson 2002), and not
“engineering” resilience as capacity to return to a fixed equilibrium point.
Disturbance in urban systems can result from changes in regulations, shifts in financial investment, changes in policy that affect the wealth and access of persons to power.  Disturbance in urban systems can also result from certain flood, ice storm, or other weather events.  And of course, biophysical and socio-economic disturbances can interact, and can each result in stress in the system as well as alteration of the physical structure of the system.   All of this potential benefit of applying the disturbance concept in urban areas results from the clear application of the basics laid out above, and to equal attention to social and biophysical structures and processes.