BES at the All Scientists’ Meeting

Every three years, the participants in the Long-Term Ecological Research (LTER) Network meet to share and compare results, and to plan for the future.  this effort, involving more than one thousand researchers, educators, artists, and other collaborators in LTER, is called an All Scientists’ Meeting. The details of this large meeting can be found on the website of the LTER Network: http://www.lternet.edu/node/49531

Members of BES will be presenting posters, plenary talks, and workshops.  We’ll report on some of the highlights after the meeting is done. 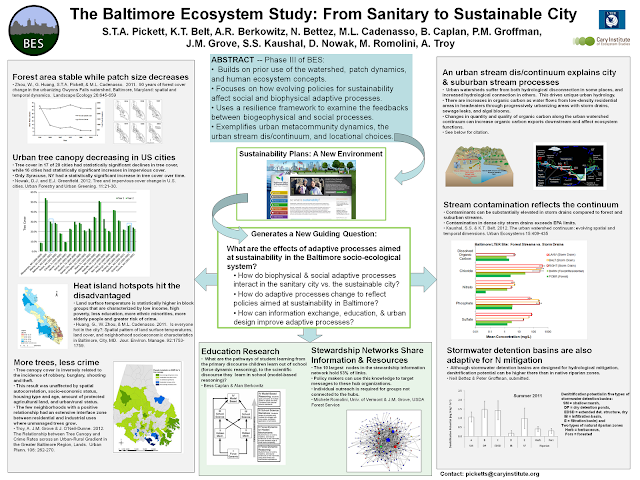 An Overview of BES for the ASM

Each LTER site is required to present a poster at the meeting.  The posters measure no larger than 4 x 4 feet, but in order to make them legible to readers viewing the posters some 3 to 4 feet distant, remarkably little text can be included.  It is a challenge to choose a breadth of research and education, and keep the poster legible and clear.  I hope that I have managed to do that with this year’s poster.
The poster starts in the middle column, providing a point-by-point abstract of the nature of Phase III of BES.    It indicates that BES III builds on the integrative concepts that have motivated our research, education, and community engagement since 1997.  However, due to the increasing concern with issues of sustainability in the Baltimore region, and the capacity of this coastal metropolis to adapt to the effects of climate change, we chose to focus on that shifting policy environment as a way to move BES forward.  As mentioned in earlier posts, we adopt the idea that Baltimore metro is aiming to move from the existing sanitary to an envisioned sustainable city.
The new guiding question for BES flows from the sustainability focus, and employs a resilience framework that relies on adaptive processes in both the social and the biophysical aspects of the interacting urban system.  Follow the arrows in the poster to build your understanding as you move through it.
The new guiding question and its subquestions then flow out into nine examples of conceptual or empirical work in BES III.

Four examples are groupse in the left hand panel.  These results  focus on the status and change of trees, tree canopy, and the vegetated components of the urban land cover complex.  The results are these:
1. Total forest cover has remained the same from 1914 to 2005, but the size of individual forest patches has decreased markedly.  Fragmentation is evident in this survey of the Gwynns Falls Watershed.  The work is published by Zhou et al. (2011).
2. Nowak and Greenfield (2012) showed that 17 of 20 US cities had less tree canopy over two times separated by about 5 years in the recent past.  Baltimore was among the decreasers.  Only Syracuse, NY had an increase in tree canopy.  This result is perhaps surprising given the policies and programs that many cities have put in place to increase their tree canopy coverage.
3. The heat island is one of urban ecology’s most robust generalizations.  However, what kind of heterogeneity is there at fine to medium scales in the heat stress experienced within cities, and who suffers as a result?  Huang et al. (2011) show that in the Gwynns Falls Watershed, which encompasses patches that represent both old and new suburbs,  dense old residential areas, commercial, transportation corridors, agriculture, and parks, among others, that neighborhoods with less social-economic wherewithal were more susceptible to the hotspots in the heat island.
4. There is controversy concerning the relationship of trees to crime.  A statistical analysis was conducted by Austin Troy and colleagues (2012).  They discovered that tree canopy was almost always associated with less crime in Baltimore City and Baltimore County.  They determined that other variables did not confound the general relationship.  However, the exceptional neighborhoods, where trees were in fact associated with higher crime, were those in which volunteer tree vegetation was present on abandoned industrial parcels adjacent to residential areas.

1 – 2. The results clustered in the right hand panel of the poster focus on streams.  Kaushal and Belt (2012) have proposed a conceptual refinement to the stream continuum concept to apply this widely used comparative tool to urban systems.  They emphasize the role of engineering, and the effects of enhanced connections in hydrological flow paths, along with the effects of disruptions in hydrological flows.  Some of these connections and disconnections are intentional, while others are incidental to the way water is routed.  They present data to show that stream contamination depends on where in this complex dis/continuum a sampling station is located.

3. Detention basins are designed to control the flow of stormwater and reduce the loading of copious rains into storm sewers while continuing to avoid street and structure flooding.  Neil Bettez and Peter Groffman (submitted for publication) have shown that although several kinds of detention structures were engineered to control stormwater, in fact, they are also adaptive for reducing the amount of nitrate in stormwater.  They thus can contribute to improving the water quality downstream.  Some of these engineered structures facilitate enough biological processing of nitrate that they do better than natural riparian zones in the area.

The bottom center panel contains two examples.  Both deal with information sharing and exchange.
1. Bess Caplan and Alan Berkowitz present a learning progression, to help understand how students ability to use scientific thinking and explanation might develop.  What students bring to the classroom, and their experience with scale, unseen forces, and the use of models beyond simple narratives are all part of the progression.  This concept is helping teachers to improve students’ ability to learn scientific concepts and to prepare better for scientific citizenship.
2. Michele Romolini, a doctoral student at the University of Vermont, presents one of her analyses of stewardship organizations in Baltimore.  Dividing the organizations into non-governmental and governmental ones, helps understand the marshaling and sharing of information.  In addition, understanding which organizations are clustered around key institutions that act as information sources, and which are relatively isolated from such nodes, helps ensure the most equitable distribution of environmentally crucial information.

The poster places these results and concepts into a graphical form.  This will be on display throughout the All Scientists Meeting in Colorado during the week of 9 – 13 September 2012.  We hope it gives a little flavor of where BES is going in its third phase, motivated by the pressure of cities to become more sustainable.