What’s This All About?

BES, as a Long-Term Ecological Research project, is funded in six year increments.  BES II actually lasted for seven years due to a change in the scheduling of the grant cycle by the National Science Foundation (NSF).  We are obliged to produce a formal report to NSF that summarizes what we have done and what its broader impacts are.  This report is technical, encyclopedic, and detailed, and we will make it available when it is finished.  However, NSF also requires us to prepare a “plain language” summary which is posted on the Research.Gov website.  For the interest of the BES community, I’m posting that “Project Outcomes” report here.

A Premier Urban Research and Education Platform
Over the last seven years, the Baltimore Ecosystem Study (BES), Long-Term Ecological Research project has consolidated as a comprehensive, multidisciplinary platform for urban socio-ecological research.  It has demonstrated that concepts fundamental to mainstream ecology, such as the ecosystem, the watershed, and the shifting patch mosaic, help to understand the linked, human-natural components of cities, suburbs, and exurbs.  The knowledge generated has helped educate citizens and students about nature and natural processes in cities.  BES results have helped managers and policy makers 1) to identify new opportunities for urban watershed management, 2) to enhance urban tree canopy and its benefits, and 3) to employ ecological processes and amenities in neighborhood revitalization.  An important product is a new classification of urban land covers that combines social, physical, and biological features.
Knowledge About Ecosystem Processes
BES has produced new knowledge about urban stream behavior, documenting their disconnection from floodplain and ground waters.  It has shown increasing salt pollution in streams the long-term, and shown the effectiveness of stormwater “best management practices” in old residential neighborhoods.  Findings of stream research focused watershed management beyond the near-stream zone, and subsequent research on urban tree canopy documented reduced exposure to UVB radiation and reduction of the urban heat island effect.  The urban heat island has been shown to be very patchy in its potential negative effects on people, and hotspots of urban heat are distributed inequitably throughout the metropolis.  Other pollutants beyond heat are also patchy, with nitrogen deposited from traffic exhaust being both higher in general magnitude than expected, and concentrated around travel corridors.  The capacity of the urban system to absorb carbon (C) dioxide has also been documented, and daily and weekly patterns confirm the relationship of C dynamics to the activity patterns work and travel.  The vegetation in Baltimore results in less release of C to the environment than would occur without trees and lawns.
Biodiversity and Spatial Dynamics 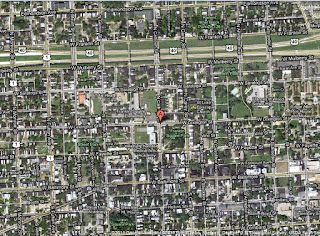 The biological organisms other than people also have important roles in the urban ecosystem.  The identity of some animals has been homogenized across different cities, as expected, but local specialization still exists.  Urban soils contain a rich community of native and introduced species that contribute to soil metabolism and to the absorption of carbon dioxide and nitrates, taking these polluting compounds out of circulation.  New communities of aquatic animals establish in the novel habitats of stormwater detention ponds, and provide nutrient cycling services and support foodchains.  Notable members of some aquatic habitats are the introduced mosquitoes that can transmit West Nile virus (WNV) from birds to people.  The composition of mosquito communities shifts from rural to urban waters and containers, increasing the risk of WNV in the city.  Birds have been shown in other cities to depend upon the wealth of neighborhoods, but in Baltimore bird diversity responds to the structure of the tree canopy in different neighborhoods.
Socio-Ecological Processes
BES research has evaluated other important interactions between the social and the biological ecology of Baltimore.  BES social scientists have discovered how the distribution of environmental “goods,” such as parks and street trees, has changed over time in Baltimore, and how access to these amenities has varied among different groups.  Results show that African Americans in Baltimore today enjoy a high degree of access to parks and playgrounds compared to African Americans in other U.S. cities.  Examination of the history of environmental zoning variances documented inequitable decision making in Baltimore’s past.  However, our research also shows that Black Baltimoreans are the beneficiaries of an “inherited” landscape.  In fact, a long history of segregation, both formal and informal, limited African American access to parks and playgrounds until large numbers of white residents left the city in the 1950s and 1960s.  It was only then that the city’s black population “spread out,” gaining access to park facilities once considered off limits.  An unexpected legacy of segregation is the contemporary association of toxic release inventory sites with white, working class neighborhoods.  Although areas of greater tree cover have less crime, not all residents consider urban trees to be an amenity.  For decades, both black and white residents of East Baltimore have opposed municipal tree-planting efforts.  In contrast, neighborhood associations during the first half of the 20th century were adept at attracting amenities, such as new street trees, while keeping out unwanted land uses.  BES social scientists adopted the theory of market segmentation to document the role of lifestyle differentiation as a key to understanding the shift from an industrial to a knowledge and service based economy in Baltimore.
Broader Impacts
The findings of BES have contributed to education of underserved communities, ecological urban design and planning, and discovery and valuation of ecosystem processes within the urban matrix from city to exurb.  Most fundamentally, BES has documented the existence and mechanisms of ecosystem processes in complex urban environments.  The BES research platform is poised to help inform, evaluate, and educate about the sustainability initiatives now being implemented in the Baltimore metropolitan region.
November 1, 2011/by emmros5_863opb
https://baltimoreecosystemstudy.org/wp-content/uploads/2019/04/BES-Circle-Text.jpg 0 0 emmros5_863opb https://baltimoreecosystemstudy.org/wp-content/uploads/2019/04/BES-Circle-Text.jpg emmros5_863opb2011-11-01 08:38:002019-04-11 12:32:14BES II Project Outcomes
What is a Metacity? Ecology and Policy
Scroll to top