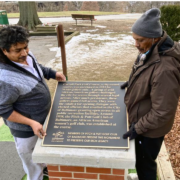 A BES graduate student’s research led to the unveiling of a marker at a Black women’s golfing club that had helped to desegregate Baltimore’s parks and golf courses.
From the Baltimore Sun article, “The genesis for the project — which began in 2018 as a way to celebrate the Pitch and Putt Golf Club’s 80th anniversary — started when Goburn-Smith was introduced to a paper written by a student pursuing his master’s degree at Ohio University. As part of the university’s Baltimore Ecosystem Study, Jim Wells was researching how parks and urban green space help communities when he found an article containing one line stating that nine-hole, 65-acre Carroll Park in the Pigtown community was essential in the desegregation of recreational facilities in Baltimore.” Read the article.
https://baltimoreecosystemstudy.org/wp-content/uploads/2022/02/BES-broader-impacts.png 720 977 Maribeth Rubenstein https://baltimoreecosystemstudy.org/wp-content/uploads/2019/04/BES-Circle-Text.jpg Maribeth Rubenstein2022-02-02 13:52:162022-02-02 13:52:25Broader Impacts of BES Research for Baltimore’s Parks & Golf Courses
BES Founding Director Steward Pickett recognized with Frontiers Award

Higher Environmental Benefits To Be Had Where Homeowners Are Less Willing To...
Scroll to top