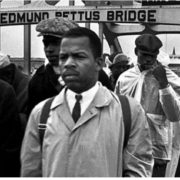 A meditation on race and ecology on the occasion of the death of U.S. Representative John Lewis

Representative John R. Lewis (1940-2020) was a hero of the civil rights movement in the United States. He was one of the six leaders of the famous 1963 March On Washington, a leader of the Freedom Rides and other key protests, as well as organizations like the Student Nonviolent Coordinating Committee. He worked tirelessly toward improving civil rights for Black Americans and other Americans of color.  His autobiography summarizes much of his vision, work, and experience (Lewis 2012). He served in the U.S. House of Representatives from 1987 until he died in July of 2020.  The death of such an important advocate for civil rights is a cause for reflection, especially since 2020 has come to represent a global reckoning on racism in many places around the world.  He often spoke of “good trouble” in describing the non-violent and political work of alleviating the impacts of racism. An important point of reflection is the growing understanding that racism exists in two forms, one personal and one systemic. Each may require different kinds of good trouble.