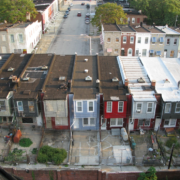 When one traverses the old rowhouse neighborhoods of Baltimore, the immediate impression is a collection of buildings in intimate connection.  In the 19th century neighborhoods, which served a city of pedestrians or a little later, trolley riders, the houses are narrow and usually lack front yards.  In the rowhouse neighborhoods of the early 20th century, there may be front yards, and the individual houses are often a little wider, but the general look is the same (Hayward & Belfoure, 1999).  This rowhouse look is in fact common across cities of the North Atlantic in both America and Western Europe (Duff, 2019).  These houses are set on walkable blocks, bisected by narrow alleyways (Figure 1).  They seem familiar, and the visual rhythm of warm hued brick facades of Baltimore adds a welcoming aspect to the city (Chop, 2014; Maxwell, n.d.).

Rowhouses As Part of a Stormwater Management Machine

Not so obvious is the fact that these rowhouse blocks that characterize the older parts of the city and the inner ring suburbs are actually a machine.  They are a machine to manage rainwater. The roofs of rowhouses are essentially flat, but slope toward the back of the house (Figure 2). Rain that falls on these roofs is delivered toward the back, and downspouts carry it into the usually small back yards.  Many such yards, being spaces designed and habitually used for storage and household tasks, are paved, and the stormwater flows across them into the alley behind.  The paving of the alleys slopes gently toward the center of the alley, forming an inconspicuous gutter.  The alleys are designed to deliver the water they collect from all the rowhouses to the street at either end of the block.  There, the collected stormwater flows into the curbside gutters on the main streets, and enters into stormdrains. The storm sewers deliver the rainwater to streams, directly to the harbor, or in many cases to mains that have replaced the once abundant surface streams of the city and suburbs (Kaushal and
Belt 2012).

So what looks like a row of houses with their associated streets and alleys designed to permit flow of people, removal of garbage, or bulk delivery of fuels, is actually a machine to collect and remove rainwater from the city.  Architect Klaus Philipsen (2012) describes some key aspects of the functionality of a rowhouse block: “The alley[s] are the bowels of the neighborhood, sewage flows out here (historically in the alley, now under it), trash goes out here and electric power comes in here. Often the alley was also the place for horse stables (later for garages).”  But as Guy Hager once told me, the function of a rowhouse block has another dimension.  It is also a stormwater runoff machine.

The assumptions that governed the engineering of the rowhouse/alley/street stormwater machine seem not to hold any more.  The concerns when the machine was installed, mostly through the 19th and early 20th centuries, did not question that basic assumption.  The idea was to get water off the surface of the city as quickly as possible. The stormwater machine is quite efficient, in part because of the high density of buildings that emerged from the need to have as many workers as possible live within walking distance of jobs in factories and the port.

However, two problems arise from the efficiency of the stormwater machine.  First, the fast flow of stormwater erodes the banks of the streams into which storm drains empty.  Downcutting of the bed of the streams is a well known cause of the inability of urban floodplains to keep nitrate pollution out of streams.  The rapid flow of water over tar roofs, and then over heat-retentive masonry and pavements, means that storm water drastically raises the temperature of streams.  This causes many fish and insects that require cool, shaded stream water to abandon their now hot, urban habitats.  In addition, the sediments accumulated from construction or soil disturbance in yards or from traffic in the streets, are carried into streams and the Inner Harbor, adding to the pollution burden of the Chesapeake Bay.  Trash and refuse follows a similar pathway carried by stormwater.

There is another problem.  Although Baltimore has separate storm drains and sanitary sewers, the old pipes are leaky, and storm water sometimes enters the sanitary system.  That can add to the load on wastewater treatment facilities, and blow out the manhole covers of sanitary sewers due to the unexpectedly high flow augmented by stormwater.  The leaking sewage sometimes contaminates the surface streams in whose valleys the sanitary sewer mains are located.

These leaks and pollution loads in the stormwater system, have suggested new approaches are required for stormwater management.  Over the last few decades, especially since the passage of the Clean Water Act in 1972, it has become clear that the efficiency of the stormwater machine can lead to other problems in our urban and coastal waters.  What can be done?

Part of the answer is to break the stormwater machine.  Where the soil can absorb stormwater, interrupting the fast flow of water from roof to bay is a possibility. Breaking the machine can be achieved by inserting various kinds of green stormwater-absorbing infrastructure.  This includes green roofs, bioswales, raingardens, curb cuts, and in places where vacant lots abound, channeling stormwater into those sites, or engineering features in vacant lots that promote absorption. The “Blue Alley” project in Baltimore replaces the impervious pavement of an alley with permeable pavers (Figure 3). Philipsen has a 2016 blog post that illustrates some other excellent examples of breaking the old stormwater machine. Somewhat more affluent rowhouse neighborhoods sometimes already contain backyards that have some or most of their surface devoted to soil and plantings (Figure 4). Most interruptions of the stormwater flow “before the pipe” are designed to be effective for the first inch of rainfall. This is especially important in cutting down on heat and sediment transferred to streams and to coastal waters.

Not every place is ideal for particular interruptions in the stormwater machine, however.  Underground infrastructure of pipes, wires, and foundations may limit where such interventions can be installed.  The limit may not be apparent from a quick look at surface features.  The soils in an area may not be good at absorbing water.  This is the case in a lot of the soils above the fall line in Baltimore, because the bedrocks there often weather to fine textured soils that restrict percolation of water downward.  Finally, there may be social limits to where green stormwater infrastructure should be installed.  If neighborhoods are not included in planning and decision making about green stormwater infrastructure, they may not wish it to be in their neighborhood.  At the very least, people deserve the courtesy of being educated about installations that might appear in their neighborhood. Likewise, if stormwater infrastructure requires volunteer maintenance by community residents or associations, it may be an inappropriate burden on people’s money and time.

Although breaking the stormwater machine is appropriate in many ways, there are physical and social differences that must be taken into account.  For example, the Baltimore City Department of Public Works has a process that includes communities in planning of green infrastructure.  And even though many non-profits have the best interest of communities at heart, not all of those organizations have the capacity to embed communities consistently in planning.  Nor may they have the resources to do other than rely on volunteer maintenance.  The failure to communicate with community members, or to consider their capacities, aesthetics, or even their fears about illicit use – dumping, secreting paraphernalia – must be taken seriously in the creative disruption of breaking the stormwater machine.

Philipsen, K. (2012). The Rowhouse and the City: Streets, Alleys and Urban Living. Retrieved January 12, 2020, from http://archplanbaltimore.blogspot.com/2012/09/the-rowhouse-and-city-streets-alleys.html

I thank Guy Hager, emeritus Director of the Great Parks, Clean Streams and Green Communities Program at the Parks & People Foundation, for sharing his insights about the Baltimore runoff machine. Thanks to Klaus Philipsen of ArchPlan Inc for permission to use his excellent photos, and for insights into the state of Baltimore’s green stormwater infrastructure.