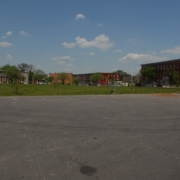 Asphalt.  What could be more pedestrian, literally underfoot?  Or ignored as a dull gray ribbon somewhere beneath the floorboards as one navigates along city streets, concentrating on one’s destination?  Or still more invisibly, as the cladding along the ditches keeping parking lots and pavement from flooding during rainstorms.
In reality, asphalt is a complex “boundary object” that points out how cities, suburbs, and exurbs are intricate social and ecological systems.  Asphalt as a boundary object links the consideration of social processes and ecological phenomena across the three-dimensional spatial mosaics of urban systems.  Furthermore, as those systems change, the role of asphalt as a boundary object can change through time as well.
A recent paper by BES colleagues Geoff Buckley, Chris Boone, and Morgan Grove (2016) provides an excellent example of the changing role a boundary object may play, and it does so by elevating the virtually ubiquitous and nearly invisible substance of asphalt to our full attention. I recommend this paper not only for its scholarly rigor, but for the poetic imagery and narrative power it employs in bringing the roles and dynamics of asphalt to our attention.  This post is a teaser for that paper.
Contemporary urban residents would hardly recognize the streets of cities in the late 19th and early 20th centuries.  There was a time when city streets were paved with bricks, cobblestones, and even wood blocks if they were paved at all.  The expense and unstable footing for horses were points contributing to contentious civic discussion about these paving materials.  Buckley and colleagues show in detail how asphalt rose to primacy among a welter of available materials, economic considerations, and networks of political influence.  Asphalt achieved its familiar roles only after it had been argued for by automobile drivers, bicyclists, and those concerned with provision of mud-free school playgrounds.
But as a multifaceted boundary object, the perceptions and actions focusing on asphalt have proven to be anything but permanent.  For example, as cities have shifted from the engineered “sanitary” focus of the last 150 or so years (Melosi 2000) to an emerging sustainability focus by looking toward a future that is jointly motivated by ecological, social, and economic integrity (Grove et al. 2016), so has the role of asphalt shifted.  Now, city policy makers and activists promote the removal of asphalt from school yards in an effort to reduce stormwater runoff and lessen the heat island effects around schools.  So too is asphalt reduced by replacement with pervious pavement, or by piercing the streetside with bioswales or rain gardens.  Over the century of the sanitary city and moving into the desired sustainable city century, asphalt has illustrated an integrative, but changing role in the social-ecological functioning of urban areas.
As a boundary object, asphalt focuses urban social-ecological researchers on the shifting networks of concern and changing understanding of what constitutes an amenity or disamenity among urban ecosystem structures.  The very factors of imperviousness and availability that led to the widespread adoption of asphalt ultimately contributed to its disavowal by environmentally conscious policy makers and by communities and agencies sensitive to social equity.  Have a look at Buckley et al’s (2016) paper to understand this compelling history and its ecological implications more fully.
Steward Pickett, Director Emeritus
Literature Cited
Buckley, G. L., C. G. Boone, and J. Morgan Grove. 2016. The Greening of Baltimore’s Asphalt Schoolyards. Geographical Review:n/a-n/a. DOI: 10.1111/j.1931-0846.2016.12213.x
Grove, J. M., D. L. Childers, M. Galvin, S. Hines, T. Muñoz-Erickson, and E. S. Svendsen. 2016. Linking science and decision making to promote an ecology for the city: practices and opportunities. Ecosystem Health and Sustainability 2:n/a-n/a. DOI: 10.1002/ehs2.1239
Melosi, M. V. 2000. The Sanitary City: Environmental Services in Urban America from Colonial Times to the Present. University of Pittsburgh Press, Pittsburgh.
https://baltimoreecosystemstudy.org/wp-content/uploads/2017/04/DSC_0001.jpg 685 1024 John Lagrosa https://baltimoreecosystemstudy.org/wp-content/uploads/2019/04/BES-Circle-Text.jpg John Lagrosa2017-04-20 12:48:002019-04-11 12:29:39Asphalt: Evolving Urban Boundary Object
Renewal and Diversity

The MetaCity: Baltimore’s Transportable Idea in Thailand
Scroll to top