Modern American urban ecology can be said to have come to fruition to a large extent in Baltimore.  Of course there are other cities where parallel, reinforcing, or complementary research and engagement activities are taking place, and all contribute to the emerging edifice of contemporary urban ecology.  But the work in Baltimore has a distinct flavor that helps understand what is novel about today’s urban ecological science.  Much of this is summarized in the book by Grove et al. (Grove et al. 2015). 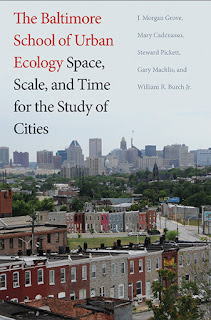 The Baltimore School owes a great deal to the Baltimore Ecosystem Study.  The Baltimore Ecosystem Study, like its sibling the Central Arizona-Phoenix project, is a National Science Foundation-supported research and education project, first funded in 1998. Indeed, the long-term funding of integrated urban social-ecological research started by the NSF in these two projects is a major reason that contemporary urban ecological science now exists as a part of mainstream ecology and as an important cross-disciplinary effort.  Additionally, urban research in Seattle, Chicago, New York and Boston has also grown rapidly over the last 20 years.  Deeper roots of urban ecology in Europe and Asia have “hybridized” with the emerging American contributions to produce a broad, integrated, and rapidly evolving discipline (McPhearson et al. 2016).

What is a School of Thought?

It turns out that this multifaceted mission can be said to suggest the existence of a school of thought and practice (Cadenasso and Pickett 2013).  A school comprises a set of related and reinforcing components (Morris 2015 p. 201).  Schools consist of 1) theories, concepts, and models; 2) linked research approaches, 3) a network of student and professional training; 4) modes of application to practical issues, and 5) a community that shares and advances goals unifying the other components. Schools are often invisible, and their basic assumptions and approaches are rarely stated and even less rarely evaluated.  And of course, schools may differ from one another.  We believe that as a mode of thought and practice, the Baltimore School represents a scientific culture that actually extends well beyond the confines of the Baltimore Ecosystem Study and its study region.
One reason that we articulate a Baltimore School is to contrast it with the classical Chicago School of Urban Ecology (Cadenasso and Pickett 2013).  This school was developed in the opening decades of the 20th century in the department of sociology at the University of Chicago.  This was the founding department of American sociology, and its members were anxious to codify a novel approach to studying the social structure and dynamics of cities.  Although such a study would be important in an of itself, because Chicago was the fastest growing city in the world — ever — at that time, there was the added urgency of developing a sociology adequate to the task of understanding a new kind of city.
The Chicago School was clearly a sociological invention.  Yet, it has been called a school of urban ecology.  This labeling has persisted or re-appeared ever since Park and Burgess’s pioneering book on The City (Park and Burgess 1925).  Some sociology textbooks of the last few decades even explain the long-standing critiques that led to the demise of the Chicago School in the 1930s in terms of ecological flaws (Gottdiener and Hutchison 2000).  So several of us (Cadenasso and Pickett 2013, Grove et al. 2015) thought it wise to reinforce knowledge that 1) the Chicago School was notthe contemporary representation of ecological understanding of urban systems, and 2) that there were new approaches, intellectual tools, and integrated networks that were worthy replacements.  Hence, we articulated the tenets of a school of social-ecological science that could be labeled a school.  We have been heartened that Sharon Kingsland, a leading historian of science at Johns Hopkins University specializing in ecology, agreed with the use of the term school for this effort.
The positive aspects of the Chicago School include 1) its focus on urban rather than rural settlements, 2) the use of the case history approach, 3) empirical techniques such as interviews and field surveys, 4) the use of a clear theoretical framework motivated by competition among different uses and community types within the city, and 5) a recognition of cities as dynamic and mutable.  Many of these features are conspicuous advances over the urbanism that preceded the Chicago approach, which employed a more physical or formal, and a more static view of cities.
But the Chicago School ultimately declined for many reasons.  The social shortcomings of the Chicago School have been well known for a long time (Hawley 1986).  It took rural and small settlement life as a desirable norm, and cast many urban phenomena in terms of pathologies.  It explained changes in neighborhoods and districts as interactions of unitary human communities.  It idealized spatial interactions and assumed sequential replacement of different residential and commercial zones.  It neglected individual or household behaviors.  It adopted explanatory models from plant ecology via analogy, but without recognizing that some of these, such as succession, were being challenged and refined in their home discipline even at the time (Light 2009).  Furthermore, because they adopted competition among communities as the predominant mechanism of urban change, they neglected positive social interactions.  It is also notable that they based many of their social assumptions on what are now seen as fixed, social-Darwinist view of races and immigrant groups.  Their distress at the massive arrivals of new immigrant groups — African Americans from the South, and Europeans from southern and eastern countries — is palpable in the 1925 book (Park and Burgess 1925).  Notable in this regard is their apparently willful ignorance of the more dynamic and empirically open approach to social science pioneered by W.E.B Dubois 20 years prior to the height of the the Chicago ascendancy (Morris 2015).

Contemporary Urban Ecology as a School of Thought and Practice

The Baltimore School is much more than a point-by-point refutation of the Chicago School.  Indeed, some of the practices of the Chicagoans, such as case study and empirical studies on the ground in communities, are mainstays of contemporary social-ecological understanding.  However, there are features that have emerged in contemporary urban ecology that are worth highlighting (Cadenasso et al. 2006a).

First, the Baltimore Ecosystem Study focused on an extensive metropolitan area as a social-ecological system.  Urban ecology must now extend well beyond “the city” (Boone et al. 2014).  Furthermore, the social and the biological are given equal intellectual weight, and the ultimate goal is to understand the urban system — city, suburbs, and exurbs — as an integrated social-ecological system.  This has required consistant interaction across a long list of disciplines.  Sociology, demography, geography, anthropology, economics, and history have melded their voices with plant ecology, wildlife ecology, remote sensing, hydrology, soil science, atmospheric science, geomorphology, metacommunity ecology, and stream ecology.  Within the social features of the system a vast array of power, technological, cultural, and political processes must be explicitly recognized.  We have found the human ecosystem framework to be a useful tool to enhance integration (Machlis et al. 1997, Pickett et al. 1997).
Second, the Baltimore School does not assume that cities and urban systems are pathological.  This is not to say that urban areas do not have environmental or social problems.  However, the goal of urban ecology is fundamentally to understand the structure and function of integrated social-ecological systems in all their spatial, temporal, and organizational complexity (Cadenasso et al. 2006b).  Urban ecology can and does often turn its attention to research questions that address important concerns of communities, managers, and policy makers.  But drivers and interactions that have positive, negative, and unintentional effects are all investigated without prejudice in contemporary urban ecology.
The phrase “spatial, temporal, and organizational complexity” used above is key to the Baltimore School.  Urban ecology must investigate complex spatial mosaics of regional extent.  Investigations focus on local to regional scales, and even extend to understanding the global influences on local and regional urban processes. Thus, spatial scale is a key concern of contemporary urban ecology.
Temporal complexity sets urban ecology in a deep historical perspective, acknowledging that past decisions and the social and structural legacies they engender are important determinants of current system processes.  Furthermore, temporal change is ongoing in cities, and the dynamic models of particular times and places may not apply to other locations or trajectories of change.  Shrinking, post-industrial, sprawl, ghost, and shanty cities or districts are examples of the variety of dynamics urban areas are now experiencing (McHale et al. 2015).
Organizational complexity introduces another important dimension of scale.  It indicates that decisions and behaviors can originate at individual, household, community, governance, and jurisdictional levels, for example.  Given that the institutions that exist on different organizational levels have different spatial extents and different longevities, the opportunity for complex, non-linear effects is great.

Go Where the Data Lead You

One facet of the Baltimore School is to not be bound either by vernacular “urban legends” or by preconceptions.  Urban areas are already the home of more than 80% of residents in wealthy nations, and globally, the urban population stands at greater than 50%.  This means that some manner of urban settlement — whether dense city, compact suburb, suburban sprawl or exurban retreat — is a matter of deep personal experience of most of humanity.  In other words, we all “know what a city is” and have personal opinions about the benefits, frustrations, or vulnerabilities of our urban (sensu latu) homes and workplaces.  But personal experience can be misleading and must be questioned when we enter the realm of urban ecological science.  We have debunked urban legends elsewhere (Pickett et al. 2008), and myths about trees and crime, misunderstanding the relationship of mosquitoes breeding and trees, the low biodiversity of vacant lots, are among “legends” currently being clarified.  The key is to follow the scientific approach of going where the data lead us, and to examine assumptions about social-ecological pathologies, ecosystem services, and structure-function relationships (Pataki 2013).  While these assumptions may reflect legitimate human values, and thus are quite legitimate motivators for research. The conclusions must arise from the data and not from the assumptions.
The relationship of data to decision making brings with it an obligation for contemporary urban science to engage in the civic dialogs shaping and managing urban systems.  Science cannot ethically impose its wishes on urban systems, but it must legitimately share and explain its conclusions in the civic dialog, and engage with urban designers, planners, managers, and policy makers in their quest to improve the sustainability of urban systems and city life (Childers et al. 2014).

Where is the Baltimore School?

This essay has sought to explain what a school is, and how the Baltimore School differs from and supersedes the long-discredited Chicago School.  The essay has not touched on other schools of urbanism, each of which has value.  The Los Angeles School (Dear and Dahmann 2008)for example, is helpful in advancing a regional understanding of urban systems.  Many of the other schools are predominantly motivated by urban design or planning concerns, or remain thoroughly rooted in social science traditions.  One of our goals in the Baltimore School is to suggest the importance of including ecological science perspectives and approaches in the study of urbanization, city/suburban/exurban mosaics, and in designing and managing for sustainability (McGrath 2013, Pickett et al. 2013).  The functional connections required to work with both ecological and social connectivities is the Continuum of Urbanity (Boone et al. 2014).  This emerging theoryhighlights the kinds of exchanges, influences, and effects that spread throughout and between urban megaregions even at the global scale.
I close with a plea to see the Baltimore School as an expression of a broader and inclusive approach to incorporating ecological knowledge into understanding, envisioning, and managing the changing urban realm wherever it exists (McHale et al. 2015).  The Baltimore School isn’t a little red schoolhouse at any particular crossroads, and it isn’t just in or about Baltimore.  It is an invisible college and framework for an inclusive ecological-social approach to the emerging and ongoing complexities of urban systems worldwide.