The 100th Anniversary meeting of the Ecological Society of America was held in Baltimore this year.  Some 4,600 members of the society gathered to share scientific insights, hold workshops on better connecting the science to the larger world, and promoting the diversity of its own community.  In addition there were field trips to both urban and non-urban sites, and a celebration at the Union Craft Brewery. 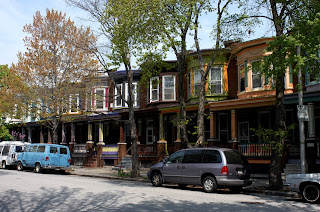 Many attendees remarked to me that urban ecological science seemed to be particularly  well represented at the meeting.  An news article in Nature (http://www.nature.com/news/ecologists-embrace-their-urban-side-1.18237) brought several of these impressions together.  The article estimates that some 10% of the activities and presentations at the meeting had something to do with urban ecology.  This is a far cry from the early days of BES when there were but one or two presentations, and very often they were isolated in the last few hours of the meeting, after the numbers of attendees had begun to dwindle.  Notable was a well attended symposium on the first afternoon of the meeting which highlighted Baltimore and other urban ecological research.
Another notable role of urban perspectives was the ecological urban design project led by Alex Felson of Yale’s Schools of Architecture and of Forestry and Environmental Studies.  The Society’s Earth Stewardship Initiative provided a venue for this series of workshops, design charettes, and studios involving students from several architecture schools along with Baltimore secondary school students.  Several communities and the city Office of Sustainability had suggested opportunities for ecological urban design and these were the focus of creative, socially, and ecologically well founded designs that emerged during the week.  The fruits of these efforts were shared with the city and communities toward the end of the week.

Another jewel in the urban crown at the ESA meeting was the presentation by Beth Strommen, Director of the Baltimore City Office of Sustainability.  At a lunch honoring the members of the Society’s Rapid Response Team, Beth described the city’s sustainability plan, initiated in 2009, and subsequent specific projects and milestones that she and her colleagues have been working on in close collaboration with other city agencies, communities, and environmental non-governmental organizations.  The climate action plan, the forest canopy plan, the urban agriculture initiative, and the disaster preparedness plans are an impressive suite of activities aimed at improving Baltimore’s environment and the well being of its residence.   The team left the lunch convinced that Baltimore is in fact one of the nations most successful sustainably oriented cities.
All of these activities clearly symbolize the position of urban ecology as a component of the discipline’s mainstream in the United States.  It was very fitting that this acknowledgement coincided with the arrival of ESA in Baltimore.
https://baltimoreecosystemstudy.org/wp-content/uploads/2019/04/BES-Circle-Text.jpg 0 0 John Lagrosa https://baltimoreecosystemstudy.org/wp-content/uploads/2019/04/BES-Circle-Text.jpg John Lagrosa2015-08-30 12:13:002019-04-11 12:30:41American Urban Ecology Comes of Age
BES at the 100th Annual Meeting of the Ecological Society of America, in Ba...A Change in the BES Community: A New Position for Peter Groffman
Scroll to top