A lot of effort in urban ecological science around the world is now focused on the process of urbanization.  This is reasonable because the demographic, social, environmental, and economic shifts toward urban in all its forms have become dominant trends for our planet.  The conversion of land from rural or wild landscapes and covers to city and suburb is considered by some to be the essence of urbanization.
When urbanization is charted – literally mapped – it can be seen as a one way conversion.  Often on such maps, urbanized land is shown as a shade of red, agriculture as yellow, grassland and forest as different shades of green, water as blue, and so on.  Much recent work at the coarse spatial scale shows the color-coded blob of city and suburb spreading across a landscape at the expense of wild, agricultural, or even aquatic covers.  Perhaps the garish colors were chosen to highlight the almost incredible magnitude of urban changes starting about a century ago, and even growing explosively in places like China and India where the trend started more recently.  Some observers fall into a state of panic about the urban when viewing these maps.  Such negative bias about the urban was evident in the “social pathology” approach of the Chicago School of urban sociology, or even longer ago in Thomas Jefferson’s idealization of the agricultural life and the open American frontier exemplified by the Louisiana Purchase.
But whatever the biases and rationales for the colors mapped, the changes are commonly represented as one-way transitions.  Urbanization, like the old-fashioned views of ecological succession, might be considered to be a linear, directional process that has a terminal point.  Such maps do tell a very useful story at the coarse scale.  The comparison of cities and of times, and the planning and management of regions can benefit from the coarse scale mapping of urban entities.
In spite of its value, the coarse mapping approach to urbanization does leave out some important subtleties.  Three big things about the urban realm need to be added: 1) within-urban spatial heterogeneity; 2) the issue of what comes after urban; and 3) the existence of city/suburban/exurban systems as qualities as well as material entities.

Urban is used here inclusively, referring to various kinds of dense, demographically diverse, infrastructurally invested systems and their various human networks and social interactions.  Urban is city, suburb, and exurb together.  It includes locations as different as central business district, leafy suburb, shantytown, strip mall, industrial park at the Interstate exchange, forested park, community gardens, vacant lots, and many more kinds of designed and accidental places.
Sometimes the red blobs of urban maps are shaded to represent commercial, transpiration, residential districts of varying densities.  If the maps are constructed at relatively fine grained spatial resolution, riparian, forest, park, grasslands, brownfields, and the like may be shown.  Depending on the spatial resolution and how land cover classes are defined, infill and edge sprawl development can be shown.
But cover can be conceptualized in a way to acknowledge that it comprises both biologically-derived ecological components like trees, shrubs, grass, and socially derived components like buildings and pavement.  Human actions stand behind these heterogeneous components through migration, transportation, design, construction, management, demolition, etc.  The HERCULES land cover system reflects this multi-dimensional biological-social heterogeneity (Cadenasso et al. 2007).

What Comes After Urbanization?

The issue of heterogeneity within coarse-scale representation of urbanized areas points to the second shortcoming of simple conceptions of urbanization.  Once a place is urbanized, it can continue to change.  In other words, the nature of urban fabric and the interactions it is entangled with can continue to change.  In fact, such change is a remarkably common feature of urban systems.  Changes range from the shifts from residential to commercial use along some transportation routes, to wholesale abandonment as population becomes sparser in the inner city, to “scrapeoffs” of older, smaller suburban houses and their replacement by lot-filling McMansions, to conversion of disused industrial structures or warehouses to residences or artistic venues.  Even the vegetation component of urbanized patches can wax and wane as street and yard plantings mature or succumb to storm, pest infestation, or neglect.  The currently growing interest in community gardens and urban farming is another example of mutability within urbanized land covers.  The urban blob is a snare and a delusion, since fine- and medium-scale changes within urban areas continue.
If the conversion of land from agricultural and wild to urban is a step function or a threshold that is not reversible at the coarse scale, still urban processes continue.  Urbanized areas continue to change, sometimes in large ways and sometimes in micro-patches.  Hence, it may be useful to conceive of urbanization in ways like ecologists have come to view community or ecosystem succession.
Classically, succession was thought to start with a pioneer community established after some large disturbance and to proceed through dominance by higher statured plants while adding layers, and ultimately to end in a stable configuration and composition of species and metabolic processes — the so-called climax.  Contemporary understanding of succession accepts that “stages” may be skipped or not come in the expected order, that fine or medium scale disturbances may continue to play a role in structuring the community, and that there is rarely anything like a local climax.  Urbanization may be like this – an idiosyncratic trajectory, contingent upon a specific concatenation of human and natural events, and not reaching some stable end point.  Urbanization in the current era may best be thought of as an ongoing urban processes.  In other words, to have been urbanized is not to stop changing.
Some social scientists have similar views.  For example, Gottdiener and Budd (2005:184) state that “Urbanization attempts to chart and understand the rise and fall of great cities.”  In that same article they point to some of the complexities of contemporary urbanization.  The existence of multiple kinds of urban form within the same urban system, the role of industrialization in urbanization, the role of consumption lifestyles, and the regional scope and connectivity of city and suburban settlements.  Marcotullio and Solecki (2011) note that some social and environmental problems blamed on urbanization would be better disaggregated into more distal, fundamental causes, such as affluence, lifestyle, and power relationships rather than a vague, overgeneralized variable such as urbanization.

The City as Quality

Urbanization is often thought of in the environmental sciences and in the planning realm as a physical entity.  This view supports the emphasis on mapping and the colorful sprawl time-series we so often see in writings about urban policy and urban problems.  Marcotullio and Solecki (2013) do a nice job of highlighting the limitations of the approach to cities only or primarily as quantities or physical entities.  Maps of land conversion, drawing of sharp boundaries, and defining the distinctions between urban versus the rural and the wild, for example, are approaches that are reinforced by the view of cities as quantity or entity.  Social phenomena such as human density, concentration, kind of employment (agricultural vs. non-agricultural), and heterogeneity are part of the “entitation” of cities.  So are the physical features such as impervious surfaces, modification of stream networks, transportation and infrastructural grids, commuting radii, installation and management of vegetation, and the concentration of heat, contaminants, and certain resources.  All are mappable quantities.
Certainly cities, suburbs, and exurbs are physical places.

But they are also lived experiences and suites of interactions. These are the qualities of urban systems.  Qualities include such things as institutional arrangements and social norms, reliance upon legal versus familial strictures, connection with distant resources, opportunities, and limits.  Lifestyle and livelihood might be useful short hand for important features of the urban systems as quality.  Of course, there are many economic and social processes that scaffold these lifestyle and livelihood as quality.  Another aspect of quality is sense of place.  Sense of place reflects individual and community-held cognitive maps, the landmarks that people mentally locate themselves and also physically navigate by, the feeling of support or comfort in some locations versus discomfort and fear in others.

Importantly, although these all reflect quality of the urban, it is possible using various sociological and anthropological methods to measure and compare these reactions to urban as quality.  Many of the features of the human ecosystem framework (Machlis et al.  1999) reflect the qualitative side of Cities/Suburbs/Exurb systems.  Myths and cultural resources, interacting individuals, and the temporal changes of households, communities, and institutions become part of the quality of urban life as well.  These qualitative features are recognized by contemporary social-ecological urban systems theory to be involved in feedbacks with the biophysical processes in urban ecosystems.  Discovering and understanding these linkages between the social qualities and the biophysical quantities remains a key goal of contemporary urban ecological science.

Is There a Better Term? 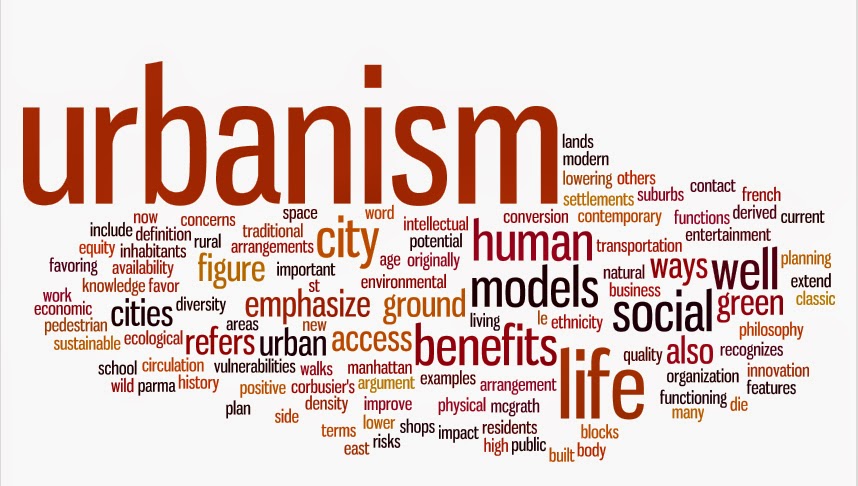 Urbanization as a term fails us by not connoting the subtleties of internal physical and social heterogeneity, the fact that urban areas never stop changing, and the idea that “cityness” is both physical quantity and social quality.  The processes are multiscalar and continue in various forms, from “the business cycle” to population growth and residential thinning.  If the suffix “-ize” means to become something – in our case to become urban — what word will stand for the continuing changes, sometimes episodic and sometimes gradual once the urban realm has come into being?  Maybe we can shoehorn “urbanization” into this definition, and beat it into submission.

Or maybe we can speak instead of “urbaning,” to represent the ongoing changes that old, new, and yet to be born cities, suburbs, and exurbs will be involved in.  Urbaning would mean the condition of being urban and dynamic.  Or since nobody is going to accept such a neologism, maybe we can just be careful with our conceptual, empirical, and theoretical models, and always keep urban quality, urban quantity, and urban change in clear view across scales from a neighborhood to an urban megaregion.

Cadenasso, M. L., S. T. A. Pickett, and K. Schwarz. 2007. Spatial heterogeneity in urban ecosystems: reconceptualizing land cover and a framework for classification. Frontiers in Ecology and Environment 5:80-88.  Concepts and a spatial analysis approach that links socially-generated and biologically-generated sources of spatial heterogeneity at fine scales in urban, suburban, and exurban landscapes
Gottdiener, M. and L. Budd. 2005. Key concepts in urban studies. Sage Publications, London.  A conceptual dictionary of terms about urban studies from the social sciences.  Useful entries on urbanization and urbanism.
Machlis, G. E., J. E. Force, and W. Burch, Jr. 1999. The human ecosystem as an organizing concept in ecosystem management. Pages 21-36 in N. C. Johnson, A. J. Malk, W. T. Sexton, and R. Szary, editors. Ecological stewardship:a common reference for ecosystem management. Elsevier Science Ltd., Oxford.  The Human Ecosystem Framework contains many elements that represent quality of urban areas, as well as those that are physical entities or quantities.
Marcotullio, P. J. and W. Solecki. 2013. What is a city? an essential definition for sustainability. Pages 11-25 in C. G. Boone and M. Fragkias, editors. Urbanization and sustainability: linking urban ecology, environmental justice, and environmental change. Springer, New York.  A clear and compelling assessment of the quantity and quality approaches to cities, and cautions about the neglect of quality in environmental sciences.  An excellent overview of the social controversies behind this continuum.
Simone, A. 2010. City life from Jakarta to Dakar: movements at the crossroads. Routledge, New York.  Discusses the nature of “cityness,” and is thus a nice complement to Marcotullio and Solecki with many examples from the very dynamic urban processes in Africa and South Asia.
https://baltimoreecosystemstudy.org/wp-content/uploads/2019/04/BES-Circle-Text.jpg 0 0 emmros5_863opb https://baltimoreecosystemstudy.org/wp-content/uploads/2019/04/BES-Circle-Text.jpg emmros5_863opb2014-09-17 17:34:002019-04-11 12:30:42Does Urbanization Stop?
Collecting Data is the Most Abstract Thing You Can Do.BES Book of the Year, 2014-2015: Gottdiener and Hutchinson, The New Urban S...
Scroll to top