Who did this work?

The Baltimore Ecosystem Study, Long-Term Ecological Research Program is a large, complex, and active endeavor.  Its participants include 40 researchers, educators, and leaders in community engagement.  In addition, there are five Post-Doctoral Associates who participated in the project last year.  This community of senior professionals mentors and works with more than 100 graduate students at some 21 universities.

What has this group been up to?

The detailed answer is provided in our 2012 Annual Report, a comprehensive document of 103 pages (http://beslter.org/bes_annual_reports/bes_annual_report_2012.pdf).  In it, readers will find overviews of the activities in research, education, and community engagement, as well as key findings of nearly thirty disciplinary and integrated social-ecological research projects.  The activities and findings are divided according to which of the BES III research topics each mainly addresses: Locational Choice of Households and Institutions; The Urban Stream Dis/Continuum; and Urban Metacommunity Theory.

·         The development of environmental inequities can be 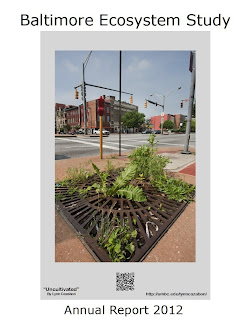 traced through time, and are more than incidental spatial correlations (C.G. Boone, reporting).

·         Most tree regeneration in cities is volunteer rather than planted, but in Baltimore and 16 other cities, tree cover declined significantly in the recent past (C.J. Nowak, reporting).
·         Exurban land subdivision from 1995-2007 was extraordinarily scattered and low density, with the vast majority comprising only 2 or 3 lots.  Developers apparently favor small subdivision due to the shorter times taken to have them approved (E.G. Irwin, reporting).
·         A novel, agent based econometric model accounting for basic market conditions generates fundamentally different predictions than standard urban economic theory (E.G. Irwin, reporting).
·         A strong statistically negative relationship was found between tree canopy cover and crime in Baltimore City and Baltimore County.  The models accounted for a dozen socio-economic control variables (A.R. Troy, reporting).

·         How urbanization affects floodplain sedimentation and subsequent biotic controls on nutrient assimilation constitutes a crucial historical legacy (D.J. Bain, reporting).
·         The role of groundwater dynamics on urban stream flow and water quality, especially through the role of aging and over-connected water infrastructure systems, is emerging as a key process (K.T. Belt, S.S. Kaushal, and C. Welty, reporting).
·         Phosphorus, one of the important pollutants in Baltimore streams and the Chesapeake Bay, shows increased loading with impervious cover, and a shift to export during high-flow conditions.
·         Pharmaceuticals and personal care products, along with illicit drugs, are detectable in streams, and stream primary producers are sensitive to some of these contaminants (E.J. Rosi-Marshall, reporting).
·         Leaf litter input into the urban “headwaters” of gutters and storm drains constitutes a major source of carbon pollution downstream, and suggests new management needs (K.T. Belt, S.S. Kaushal, reporting).

·         The tree composition of different land use types shows great turnover or beta-diversity across types, suggesting a predominant role of human choices concerning management (C.M. Swan, reporting).
·         Along a gradient of management, local diversity of low-intensity sites was higher than patches managed at medium-intensity.  However, there was lower species turnover among low-intensity management sites compared to medium intensity sites.  The role of high levels of dispersal among sites is suggested (C.M. Swan, reporting).
·         Mosquito traps in the most highly urbanized sites predominantly captured invasive species, while rural reference sites included both invasives and native, often non-human biting species (S.L. LaDeau, reporting).
·         The role of discarded materials that can support mosquito breeding and the role of garden and lawn watering are associated with contrasting socio-economic characteristics of neighborhoods, but they have temporally distinct effects (S.L. LaDeau, reporting).
·         A global survey of urban bird communities indicates that avian communities are unique across different urban regions, with only a few having cosmopolitan distributions (C.H. Nilon and P.S. Warren, reporting).

We have been pleased that many of our results and projects, some conducted in collaboration with city, county, and state agencies, have played a role in environmental policy and management in our region.  For example, BES has contributed to:
·         Planning for increasing Baltimore City’s urban tree canopy, and providing information on the physical and social structures of different neighborhoods;
·         Laying the foundation for a Chesapeake Bay Landscape model that should aid efforts to reduce water pollution in the Bay,
·         Assessing the functional outcomes of stream restoration originally judged based on channel morphology,
·         A better understanding of the common and contrasting features of urban biodiversity across cities, which can help meet requirements of the Convention on Biological Diversity;
·         An understanding of how urban design interacts with biodiversity and other functional aspects of city and suburban biogeochemistry.
This is just a brief scan of some of our work.  We invite you to peruse the annual report for more projects and greater detail.  A list of publications and web resources is also included in the report.

Finally, it is with considerable pleasure that I note that the cover photograph on the report is one of the wonderful photographs taken by BES 2012 Artist-In-Residence, Lynn Cazabon.  See http://www.lynncazabon.com/for more of her work.
https://baltimoreecosystemstudy.org/wp-content/uploads/2019/04/BES-Circle-Text.jpg 0 0 John Lagrosa https://baltimoreecosystemstudy.org/wp-content/uploads/2019/04/BES-Circle-Text.jpg John Lagrosa2013-08-14 12:14:002019-04-11 12:31:41What Did BES Do Last Year? The 2012 Annual Report
Coupled? Hybrid? Or Just Systems?Weeds and the City
Scroll to top