The Urbanite (www.urbanitebaltimore.com) is one of Baltimore’s cultural and intellectual treasures.  Available free at many locations, or by subscription for those who don’t get to town every month, it is always a treat to see the diverse contributions of good writing, photography, and art the editors have gathered together.
Over the past few months Urbanite ran two pieces that struck me as Big Urban Theory.  Big Theory is a general explanation of the way some phenomenon is structured or works.  Theory in its technical sense as used here doesn’t mean just a guess, or something less than certain.  One of the big theories appears in an interview by Baynard Woods of Edward Glaeser, Harvard economist and urbanist, who was in town to talk to the Downtown Partnership.  Glaeser is author of an impressive book, The Triumph of the City.  The other was a feature written by Michael Anft, entitled “City By the Numb3r5,” which summarized and explained the work of Geoffrey West and Luis Bettencourt of the Santa Fe Institute, a deep think tank focusing on complexity. 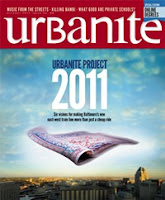 What’s Right With Cities.  Glaeser touts the city as the cradle of innovation, and indeed considers it to be humanity’s greatest invention.  He argues that cities are a mechanism to promote interaction among diverse people, give space for creativity, and contain the critical mass that makes this all work.  Among his recommendations to take advantage of the power of cities is to enhance urban density by promoting vertical growth.  Such density entails efficiencies of energy and transportation.  This is one part of a very general, or big, urban theory.
Notably, however, Glaeser neglects the biophysical aspects of urban structure and function, and gives no credit to the efficiencies that can be gained by allowing biological work to remain a part of the urban realm, or to be reinvigorated where it has been paved over or otherwise displaced.  The creative stimulus that can result from interaction of people with natural processes — with their own rhythms, peaks, and pulses – is also absent from Glaeser’s recipe for urban creativity.  Glaeser’s main points are still quite valuable even though he neglects the biological ecology that I am so fascinated by. 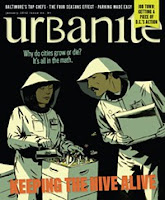 Big Number Theory for the City.  In the second piece, headlined with numbers substituting for some of the letters, a la a clever high security Internet password, the allometric theory of cities is central.  This theory, exemplified by the work of West and Bettencourt, indicates that the major properties of cities are a mathematical function of their size.  Comparing cities worldwide, they discovered that for each doubling in population, the infrastructure of a city increases only 85%.  Some functions, such as carbon footprints, also increase at the same proportion, reflecting the efficiency of dense urban development.  Crime, gross domestic product, income, and innovation as measured by patents, increase on the same trend – more than a 15% advantage compared to the expectation based on a simple linear relationship.  So both positives and negatives have the same quantitative relationships to urban population density.

Such things as history, geography, and urban design or planning have secondary roles to play in the characteristics of each city in this big comparison.  However, the deviation from the trend line helps identify characteristics for which policy and design might have particular power to intervene.
Again, the theory is relatively silent about the place of biophysical processes in the relationship.  This is a gap worth filling.  Furthermore, the theory addresses urban aggregations rather than specific districts and neighborhoods.  Given that most theories have a hierarchy of generality, with the most universal and abstract relationships on top, so to speak, and increasingly fine-scaled, detailed models of structure and function coming lower down in the hierarchy, where focus is on very specific places, events, and interactions.  Urban theory would seem to benefit from such a hierarchical structure.
The Search for Mid-Level Theory.  The recent pieces in the Urbanite have focused on the biggest urban theories that exist so far.  Its interesting foray into this heady and exciting realm has left unaddressed the question of what “middle level theory” might be helpful in doing.  I expect that the middle level theory might help in bringing more ecological understanding to bear in urban areas, and identifying fruitful levers of intervention that neighborhood communities and local managers might take advantage of.
The Urbanite has done a marvelous job of highlighting the grand unifying theory explaining global differentiation in urban characteristics, and indicating how any city is constrained in both good and bad ways by its size.  But the grand theory leaves in obscure shadows the specific ecological functions that are of interest and value within metropolitan areas, their neighborhoods, and watersheds, for example.  For that, the finer-scaled models, data, and relevant concepts are needed.  This is a focus of the major, nationally important research effort underway in Baltimore in the form of the Baltimore Ecosystem Study Long-Term Ecological Research project.
Bibliography
For further reading, the two pieces in the Urbanite, as well as an original article by Bettencourt and West, and a piece in the New York Times Sunday Magazine are cited below.
Anft, M. 2011.  City By the Numb3r5.  Urbanite. http://www.urbanitebaltimore.com/baltimore/c1ty-by-numb3r5/Content?oid=1467248
Bettencort, L. and G. West (2010). “A unified theory of urban living.” Nature 467: 912-913.
Lehrer, J.  2010.  A Physicist Solves the City.  The New York Times, December 17, 2010.  http://www.nytimes.com/2010/12/19/magazine/19Urban_West-t.html?pagewanted=all
Woods, B. 2012.  Defending the City. Urbanite. http://www.urbanitebaltimore.com/baltimore/defending-the-city/Content?oid=1463027
March 24, 2012/by emmros5_863opb
https://baltimoreecosystemstudy.org/wp-content/uploads/2019/04/BES-Circle-Text.jpg 0 0 emmros5_863opb https://baltimoreecosystemstudy.org/wp-content/uploads/2019/04/BES-Circle-Text.jpg emmros5_863opb2012-03-24 11:00:002019-04-11 12:32:13Baltimore’s Urbanite Magazine Explores Big Urban Theory
Urban Ecology HAS Changed BES Quarterly Research Meeting: Green Infrastructure
Scroll to top