There are two answers to this question.  First, a wise man, Prof. M. Gordon “Reds” Wolman, suggested at our first meeting that we needed some rules to guide how such meetings were conducted.  Reds, who died last year, was a famous and creative scientist, an accomplished administrator, and a leader in the Nation’s scientific discourse.  I first met him when he chaired a committee of the National Research Council on human population and environment.  So when Reds suggested something, we knew to listen. 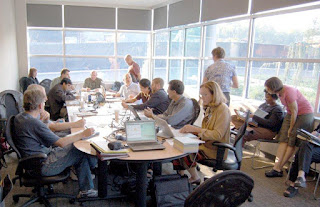 Second, we needed rules to be sure that all voices were heard during our meetings.  This idea reflects that discussions should be conceived of first as opportunities to listen, and only second as opportunities to talk.  But because this “golden rule” of meetings is rarely recognized, more operational rules are needed to ensure all voices are heard.  BES is a complicated organization, involving people who don’t work together all the time.  In fact the people who participate in BES represent a wide variety of cultures – ranging from academics, to government agencies, to community and non-governmental organizations.  At any given meeting of BES there are likely to be graduate students, middle school teachers, senior professors, municipal managers, community activists, and technicians present.  And this list doesn’t exhaust the roster.  Consequently, we needed rules to be sure that everybody knew that their ideas would be heard in the dialog.  This reason is what an evolutionary biologist would call the ultimate cause.  The fact that Reds Wolman suggested that we needed rules is what an evolutionary biologist would call a proximate cause.
So here are the rules we came up with at our first quarterly research meeting.
1. Identify a leader for the discussion.  This is to ensure that someone is looking out for the discussion as an inclusive process.  This person is responsible for making sure the rest of the rules are followed.  His or her priorities are to be sure that all voices are heard, that no voice dominates, and that the discussion achieves its stated goals.  If a meeting is a long one, it is not necessary for the same leader to be responsible for the whole meeting.  Different leaders may be chosen for different time periods, or for different topics.  In identifying a leader, a useful corollary is to choose someone to take notes.  This person may also be responsible for reporting the key points of the discussion if it is a part of a larger meeting.  Don’t expect the leader to take notes.  He or she has enough to worry about in managing the discussion in a fair and transparent way.
2. Raise your hand to be recognized.  In order to participate in the discussion, people should raise their hands.  The leader should call on people in the order in which they raised their hands.  Exceptions can be made for a point of clarification about a comment that was just made by another speaker.  An exception is also possible if a person wants to respond to something that the last speaker has just said.  However, the leader is in charge, and can call people in order regardless of what their points pertain to.
3. There should only be one conversation at a time.  If people begin to have side conversations, the leader is empowered to halt them and refocus on the larger group.  If there is a need for breakout groups or subsets, the group can organize itself into smaller clusters for such conversations.  But in any meeting, or clustered discussion, there must be only one speaker at any one time.  If the leader calls for cessation of a side conversation, this must be respected.
4. Once you have been recognized, do not monopolize the floor.  Make your comments brief, or your question clear.  Do not talk just to hold the floor.   If people hold forth, the leader may reasonably ask them to come to their point so the discussion can move on.
5. Not all silence is bad.  Sometimes leaving a little space for people to consider a response, or to reflect on what’s going on is a good idea.
6. If the discussion is a long one, the leader should arrange for breaks for physiological comfort or for getting some fresh air.  If discussants need to take a break before the leader calls for one, people should feel free to either propose a break, or simply excuse themselves as need be.
7. The leader should call for at least one “two minute drill” as a summarizing tactic.  If the discussion is a very long one, say lasting a whole day, it may be appropriate to have two minute drills periodically.  A two minute drill ensures that even those who have not participated in the discussion before the two minute drill have a safe place to comment.  A two minute drill invites each person in the group to make a comment.  It can be a summary point, identification of an issue that was missed or under-emphasized, or a point of agreement or disagreement.  Basically, discussants can make any brief point that they wish.  It is important to keep these brief and focused, however.  The modifier “two minute” refers to the brevity of the entire exercise, not to the amount of time that each member may take.  The leader can specify the amount of time, or ask participants to wrap up if they are taking excessive time.
8. The leader may change the rules.  But at all times, it should be clear what the rules are, and everybody should be prepared to follow them.
These, then, are the Baltimore Rules.  We have found them to be very helpful in ensuring orderly, open, and fair discussions.  We don’t have many rules in BES, but these are fundamental, and have helped build our respectful, collaborative, interdisciplinary culture.
https://baltimoreecosystemstudy.org/wp-content/uploads/2019/04/BES-Circle-Text.jpg 0 0 John Lagrosa https://baltimoreecosystemstudy.org/wp-content/uploads/2019/04/BES-Circle-Text.jpg John Lagrosa2011-10-08 10:10:002019-04-11 12:32:14Why Does BES Have Rules for Running Meetings?
A Presentation on BES III: Research, Education, and Engagement from the Sanitary...What is a Metacity?
Scroll to top