BES as Place
Why in Baltimore of course?  But that’s not a complete answer.  Our research, education, and community engagement are of course focused on the five-county conurbation that is centered on the city of Baltimore.  There, we focus on built, modified, and native watersheds, which are perhaps better labeled catchments.  We also focus on airsheds, captured by data from the first permanent urban tower that measures the composition and physical features of air that represents either the city or the suburbs, depending on the wind direction.  And there are neighborhoods and networks of social institutions to be understood as well as the social interactions and characteristics of entire counties and the whole city-suburban-exurban system.  These various locations are the geography of understanding and interaction of the Baltimore Ecosystem Study.  This is the geography of discovery, sharing knowledge, and interaction with communities on the ground – the three activities that make up BES
BES as Extensive Community
But BES has another, much more extensive geography as well.  BES itself is a community of scholars, practitioners, and stakeholders.  That community is most dense in the immediate region of Baltimore.  You can see a list of all the current members of the BES community by clicking on this page of our  website: http://beslter.org/frame3-stuff.html  This community consists of people who are part of the Long-Term Ecological Research program grant from the National Science Foundations, or who are supported by the USDA Forest Service or the US Geological Survey to conduct research, educate, or reach out to interested communities.  Some of the people listed as Co-Principal Investigators (Co-PIs) have written their own grants to various funding agencies to support their work in Baltimore.  Another key group is collaborators.  These are people who make and affect environmental policy in the city, surrounding counties, and the state of Maryland.  They are also people who manage various agencies that are concerned with the environment, such as sustainability, parks, public works, housing, and health. 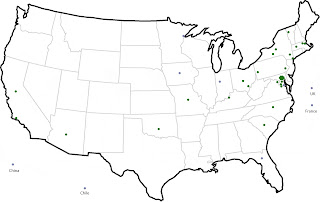 A map of the United States shows the spatial extent of the community of scholars and practitioners that makes up BES.  Green dots represent Co-PIs, and blue dots represent collaborators.  We don’t really try to represent each individual or institution in the Baltimore regions, because there are so many.  But the dots spread more broadly represent the different locations where at least one person who participates in BES is located.  Some dots represent several people.

There are some dots that lie outside the borders of the US.  These point to collaborations in place or being developed, with international partners.  This is perhaps especially appropriate because urbanization has become one of the major environmental trends on the planet.   The growth, spread, change in pattern, and connectivity of urban areas is truly a global phenomenon.  Understanding Baltimore is facilitated by comparisons with older cities in Europe, and with exploding cities in Asia.  Comparison promises to be an important tool in understanding and applying the concept of urban sustainability.  In fact, I have to admit that I am writing this post in France, where I have been invited to participate in a summer school session, entitled “Urban Environment: A Complex System.”  I look forward to learning more about the exciting urban research underway in France, and to sharing findings and organizational lessons learned from BES.
So you see, the answer to the question, “Where is BES?” is actually spatially complex.  And this spatial complexity points to the richness of expertise and institutional commitments require to attempt integrated socio-ecological research in a major conurbation.
https://baltimoreecosystemstudy.org/wp-content/uploads/2019/04/BES-Circle-Text.jpg 0 0 John Lagrosa https://baltimoreecosystemstudy.org/wp-content/uploads/2019/04/BES-Circle-Text.jpg John Lagrosa2011-09-18 03:38:002019-04-11 12:32:47Where is the Baltimore Ecosystem Study (BES)?
Swamps and the City: Part IIA Presentation on BES III: Research, Education, and Engagement from the Sanitary...
Scroll to top