Cities are hard to explain, no doubt.  Within and between cities, social capital, historical contingency, economic resources, and the deployment of power are well known explanatory variables.  One kind of explanatory process, however, has been notably absent from the roster of possibilities in urban socio-ecological research.  Surprisingly, that missing element is one of the most fundamental explanatory tools of modern biology and ecology – the adaptation of social organisms as groups.  The application of the principles of natural selection (Box 1) to social groups may also have a role in understanding the social structure of cities and urban agglomerations, and hence the effects of social groups and neighborhoods on environmental processes.
This lapse is being corrected by the scholarly and practical efforts of Professor David Sloan Wilson, of Binghamton University, a part of the State University of New York system.  Prof. Wilson is one of the world’s leading evolutionary ecologists.  He has studied the adaptation of groups of organisms in both model and actual situations for decades.  Although some biologists find adaptation of groups to be problematical, preferring to leave adaptive explanations at the nexus of individuals and the populations they constitute, the weight of models and experimental outcomes has convinced many, including myself, that this kind of explanation has great power and legitimacy.  The emergence of altruism against the seemingly unassailable momentum of individual benefit has required forceful explanatory tools.  Groups that exhibit greater altruism and cohesion are expected to be more successful than those which do not promote group benefit.
Can this explanatory hypothesis apply to cities?  Prof. Wilson and colleagues are investigating this possibility by comparing various opportunities for “prosociality”[i] in Binghamton, NY.  In BES, we might refer to social capital or neighborhood cohesion as related concepts.  The arenas in which prosociality is being examined in Binghamton range from the reward systems in high school classes, to the willingness of persons in different neighborhoods to do good deeds for strangers.  A recent article in the journal, Nature (http://www.nature.com/news/2011/110608/full/474146a.html) has summarized in very engaging and clear terms the concepts and the many community-based activities that Prof. Wilson is employing in Binghamton.  His work is aimed at understanding the social structure of this post-industrial, upstate New York State city, but he and his colleagues are also engaged in activities aimed at improving the quality of life for the 47,000 residents in their many neighborhoods. 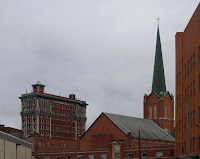 At the BES annual meeting, which takes place on 19-20 October 2011, Prof. Wilson will deliver the keynote address.  This will give us a chance to think about how the hypothesis of adaptive altruism of groups can be applied and tested in Baltimore.  For background on Prof. Wilson and his exciting work with Binghamton communities, see not only the piece in Nature referenced above, but also his own Web Log (http://scienceblogs.com/evolution/) and that of the Binghamton Neighborhood Project (http://bnp.binghamton.edu/).
I’m excited to explore how an adaptive model and the hypotheses it generates can help us better understand and promote the connection of science and society, and the prospect of people’s well being in the Baltimore region.
[i] Prosocial – Beneficial to all parties and consistent with community laws and mores; Contributing to a beneficial outcome by negotiation, problem solving, problem analysis, clarification, or respectful behaviors (en.wiktionary.org/wiki/prosocial).
The photograph of Prof. Wilson is from http://sandwalk.blogspot.com/
https://baltimoreecosystemstudy.org/wp-content/uploads/2019/04/BES-Circle-Text.jpg 0 0 John Lagrosa https://baltimoreecosystemstudy.org/wp-content/uploads/2019/04/BES-Circle-Text.jpg John Lagrosa2011-06-09 21:16:002019-04-11 12:32:47Adaptive Explanations in Cities
Complexity: The Hidden Nugget in Jane Jacobs’ BookA Moving Field Guide
Scroll to top